EIA: US renewable diesel capacity expected to increase significantly through 2024

US production capacity for renewable diesel could increase significantly through 2024, based on announced projects and those that are under construction, according to the US Energy Information Administration (EIA). Growing targets for state and federal renewable fuel programs and incentives for renewable diesel production are driving this expansion. 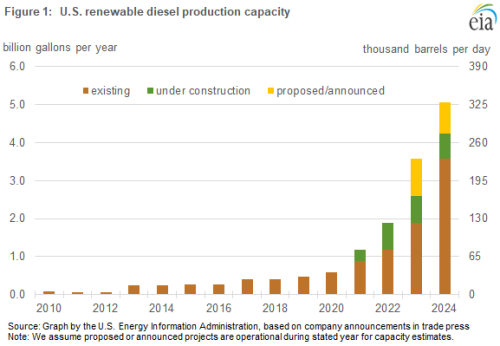 Renewable diesel is often produced at a biorefinery or by co-processing at a petroleum refinery. Feedstocks are typically processed via hydrotreating, gasification, or pyrolysis. Facilities must also account for other aspects of renewable diesel production, such as feed pretreatment and processing coproducts such as renewable liquefied petroleum gas (LPG) and naphtha.

One such refinery is Marathon Petroleum’s refinery in Martinez, California. Since closing the facility in 2020, Marathon has announced that it will begin converting the refinery to produce renewable diesel. Marathon expects the facility will start producing renewable diesel in 2022 and will reach its full production capacity of 730 million gal/y (48,000 b/d) in 2023.

The Phillips 66 refinery in Rodeo, California, is also undergoing reconfiguration. The Phillips 66 Rodeo Renewed project would produce 800 million gal/y (52,000 b/d) of renewable fuels when completely converted, making it the world’s largest facility of its kind. Phillips 66 has already completed its initial diesel hydrotreater conversion and begun producing renewable diesel. It expects to complete the second phase of the conversion by 2024. 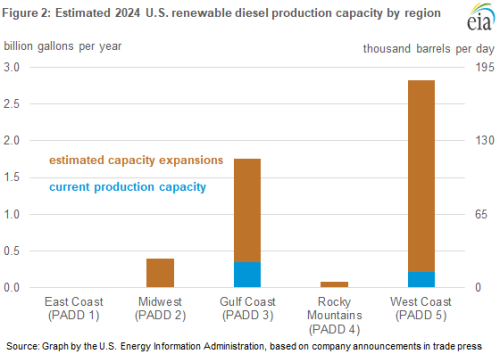 Although the expected buildout in renewable diesel production capacity is substantial, it will still be relatively small compared with existing petroleum diesel refining capacity, the agency noted.

In contrast, by 2024, it could represent 4% of total estimated diesel production capacity in the major refining complex on the Gulf Coast and 5% across the United States.

Although EIA expects significant capacity to be built on the Gulf Coast, it anticipates that a large portion of the Gulf Coast’s output will be consumed in California and other western states such as Oregon and Washington to meet future LCFS program targets in those areas.

So they are calling diesel made from biomass by the greenwash name, 'renewable diesel.' Makes little difference except to those easily fooled...when you burn carbon fuel, (even 'renewable diesel') in any engine, it pollutes like crazy.

Renewable diesel is a low carbon fuel that will be increasingly important in meeting our climate and clean air goals and decarbonizing transportation.

Contrary to the previous commenters assertion, emissions from using renewable diesel fuel are significantly less than conventional petroleum diesel, in part due to the fuels better ignition properties compared to regular diesel (higher cetane number, 65 vs. 40-50 conventional diesel). This means 50 to 90 percent lower in GHG emissions depending on feedstock and other emissions are significantly reduced as well - up to 33% lower levels of fine particulates; up to 30% less hydrocarbons (HC); up to 24% lower carbon monoxide (CO) emissions; up to 9% less nitrogen oxides (NOx);

Renewable diesel is about using carbon fuels where electric transport does not look feasible in the near future. Sustainable Aviation Fuels that are drop in replacements for jet fuel is one area, Maritime replacement of Heavy Bunker Oil is another. The Aviation and Shipping sector each contribute about 2.5% of Global GHG.
Renewable diesel will be important for these applications.

There is no fossil carbon