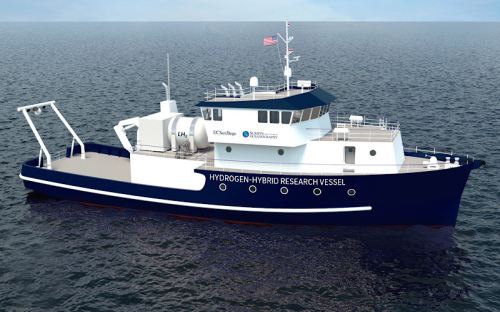 The new vessel will be operated by Scripps Institution of Oceanography at UC San Diego. The feasibility study to conceptualize the hydrogen fuel-cell propulsion technology for the vessel was initially completed in 2020 by Sandia National Laboratories, Glosten, and Scripps. (Earlier post.) The study was funded by the US Department of Transportation’s Maritime Administration.

The proposed 125-foot vessel will take three years to design, build, and commission, and replace Research Vessel Robert Gordon Sproul, which has served thousands of University of California students in its nearly 40 years of service but is nearing completion of its service life.

This new vessel will feature an innovative hybrid propulsion system that integrates hydrogen fuel cells alongside a conventional diesel-electric power plant, enabling zero-emission operations. The design is scaled so the ship will be able to operate 75% of its missions entirely using a non-fossil fuel—hydrogen—with only pure water and electricity as reaction products. For longer missions, extra power will be provided by clean-running modern diesel generators.

The hybrid-hydrogen design of this new vessel represents an innovation in the maritime industry. Development of this and subsequent zero-emission vessels is essential to the University of California’s Carbon Neutrality Initiative, the goal to be carbon-neutral by 2025.

It is envisioned that the vessel will carry up to 45 students and teachers to sea on day trips, improving the university’s capacity for experiential learning at sea. UC graduate students, postdoctoral scholars, and early-career faculty will also be able to apply for research time at sea through the UC Ship Funds Program, which provides support for expeditions on Scripps vessels through a competitive peer-reviewed proposal process.

Scripps Oceanography will also petition that the new coastal vessel serve as a shared-use facility within the US Academic Research Fleet under the auspices of the University-National Oceanographic Laboratory System (UNOLS). When completed, it will join the fleet of vessels managed by Scripps including the Navy-owned research vessels Sally Ride and Roger Revelle, which conduct global oceanographic research, and the R/V Bob and Betty Beyster, a nearshore scientific workboat. All research vessels are stationed and maintained at the university’s Nimitz Marine Facility in Point Loma.