MAN Energy Solutions has won the order to supply the world’s first, low-speed, dual-fuel engine to run on methanol within the container segment. Hyundai (HMD) will construct the 2,100-TEU vessel in Korea for A.P. Møller – Maersk, the global integrator of container logistics, while HHI-EMD, which has already experience with LGIM engines (8 engines in operation and 12 engines under construction for methanol carriers), will build the MAN B&W 6G50ME-LGIM (-Liquid Gas Injection Methanol) type—also in Korea. The engine will be Tier III-compliant.

The MAN B&W LGIM engine is the methanol-burning version of its dual-fuel solution for liquid injection of fuels, the ME-LGI engine. 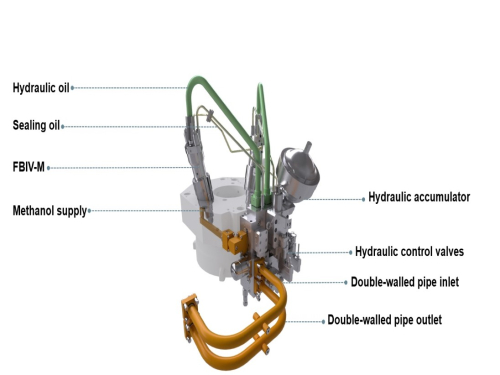 Methanol components and pipes on each cylinder. The design of the methanol fuel supply pipes is based on a double-barrier concept; a second layer encapsulates all methanol piping inside the engine room. This outer-piping is ventilated to the outside atmosphere to eliminate the risk of a methanol leakage to, for example, the engine room and to allow detection of a leakage from the inner pipe with hydrocarbon (HC) sensors. Source: MAN Energy Solutions

Features of the ME-LGIM concept include: 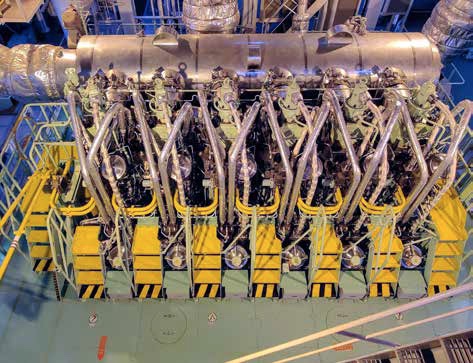 Upon launch, the newbuilding will become the first methanol-powered vessel that doesn’t carry methanol as cargo. Maersk has further announced that it expects the new vessel to be powered by green methanol with bio-fuel employed as pilot oil.

The vessel is set to enter service in 2023 and will sail in the network of Sealand Europe—a Maersk company—the Baltic shipping route between Nortern Europe and the Bay of Botnia.

Maersk is displaying great leadership in adopting renewable methanol as part of its decarbonization strategy—and well ahead of its initial 2030-ambition. For our part, we are designing dual-fuel technology that meets the growing customer demand for sustainable shipping chains and, here, our ME-LGIM engine plays an important role. It’s particularly pleasing to see it make its debut within the important container segment.

MAN Energy Solutions developed the ME-LGIM dual-fuel engine for operation on methanol, as well as conventional fuel. The engine is based on the company’s proven ME-series, with its approximately 5,000 engines in service, and works according to the Diesel principle. When operating on methanol, the ME-LGIM significantly reduces emissions of CO2, NOx and SOx.

Additionally, any operational switch between methanol and other fuels is seamless. Tests on the engine, when running on methanol, have recorded the same or a slightly better efficiency compared to conventional, HFO-burning engines.

MAN developed the ME-LGI engine in response to interest from the shipping world in operating on alternatives to heavy fuel oil. Methanol carriers have already operated at sea for many years using the engine, and, as such, the ME-LGIM has a proven trackrecord offering great reliability in combination with high fuel-efficiency.