A region of the central Pacific—the Clarion Clipperton Fracture Zone (CCFZ)—is estimated to contain vast reserves of polymetallic nodules that are rich in nickel and cobalt—minerals that are commonly mined on land for the production of lithium-ion batteries in electric vehicles, laptops, and mobile phones. Deep-sea-mining schemes propose sending down tractor-sized vehicles to vacuum up these nodules and send them to the surface, where a ship would clean them and discharge any unwanted sediment back into the ocean (e.g, earlier post). 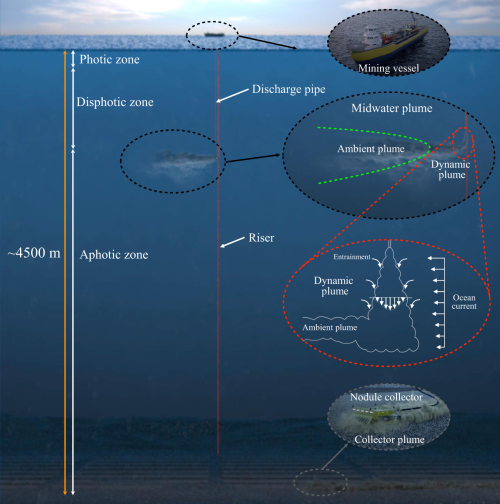 Schematic of a polymetallic nodule mining operation. From top to bottom, the three zoom-in panels illustrate the surface operation vessel, the midwater sediment plume, and the nodule collector operating on the seabed. The midwater plume comprises two stages: (i) the dynamic plume, in which the sediment-laden discharge water rapidly descends and dilutes to a neutral buoyancy depth, and (ii) the subsequent ambient plume that is advected by the ocean current and subject to background turbulence and settling. Credit: Muñoz-Royo et al.

However, the expected level of environmental impact of such mining is still being established. In April, the BMW Group, WWF and other companies—including the Volvo Group—undertook, as a precautionary measure, not to use deep-ocean minerals or finance deep-sea mining until comprehensive scientific research into the impact of deep-sea mining can be conducted and the consequences for the environment are clearly assessed. (Earlier post.)

Now, oceanographers at MIT, the Scripps Institution of Oceanography, and elsewhere have carried out an experiment at sea for the first time to study the turbulent sediment plume that mining vessels would potentially release back into the ocean. Based on their observations, they developed a model that makes realistic predictions of how a sediment plume generated by mining operations would be transported through the ocean.

Their results are published in an open-access paper in the Nature journal Communications Earth & Environment.

The model predicts the size, concentration, and evolution of sediment plumes under various marine and mining conditions. These predictions, the researchers say, can now be used by biologists and environmental regulators to gauge whether and to what extent such plumes would impact surrounding sea life.

There is a lot of speculation about [deep-sea-mining’s] environmental impact. Our study is the first of its kind on these midwater plumes, and can be a major contributor to international discussion and the development of regulations over the next two years.

Current deep-sea-mining proposals are expected to generate two types of sediment plumes in the ocean: “collector plumes” that vehicles generate on the seafloor as they drive around collecting nodules 4,500 meters below the surface; and possibly “midwater plumes” that are discharged through pipes that descend 1,000 meters or more into the ocean’s aphotic zone, where sunlight rarely penetrates.

In their new study, Peacock and his colleagues focused on the midwater plume and how the sediment would disperse once discharged from a pipe.

To pin down these dynamics, the team went to sea. In 2018, the researchers boarded the research vessel Sally Ride and set sail 50 kilometers off the coast of Southern California. They brought with them equipment designed to discharge sediment 60 meters below the ocean’s surface.

Using foundational scientific principles from fluid dynamics, we designed the system so that it fully reproduced a commercial-scale plume, without having to go down to 1,000 meters or sail out several days to the middle of the CCFZ.

Over one week the team ran a total of six plume experiments, using novel sensors systems such as a Phased Array Doppler Sonar (PADS) and epsilometer developed by Scripps scientists to monitor where the plumes traveled and how they evolved in shape and concentration. The collected data revealed that the sediment, when initially pumped out of a pipe, was a highly turbulent cloud of suspended particles that mixed rapidly with the surrounding ocean water.

There was speculation this sediment would form large aggregates in the plume that would settle relatively quickly to the deep ocean. But we found the discharge is so turbulent that it breaks the sediment up into its finest constituent pieces, and thereafter it becomes dilute so quickly that the sediment then doesn’t have a chance to stick together.

The team had previously developed a model to predict the dynamics of a plume that would be discharged into the ocean. When they fed the experiment’s initial conditions into the model, it produced the same behavior that the team observed at sea, demonstrating that the model could accurately predict plume dynamics within the vicinity of the discharge.

The researchers used these results to provide the correct input for simulations of ocean dynamics to see how far currents would carry the initially released plume.

In a commercial operation, the ship is always discharging new sediment. But at the same time the background turbulence of the ocean is always mixing things. So you reach a balance. There’s a natural dilution process that occurs in the ocean that sets the scale of these plumes. What is key to determining the extent of the plumes is the strength of the ocean turbulence, the amount of sediment that gets discharged, and the environmental threshold level at which there is impact.

Based on their findings, the researchers have developed formulae to calculate the scale of a plume depending on a given environmental threshold. For instance, if regulators determine that a certain concentration of sediments could be detrimental to surrounding sea life, the formula can be used to calculate how far a plume above that concentration would extend, and what volume of ocean water would be impacted over the course of a 20-year nodule mining operation.

At the heart of the environmental question surrounding deep-sea mining is the extent of sediment plumes. It’s a multiscale problem, from micron-scale sediments, to turbulent flows, to ocean currents over thousands of kilometers. It’s a big jigsaw puzzle, and we are uniquely equipped to work on that problem and provide answers founded in science and data.

The team is now working on collector plumes, having recently returned from several weeks at sea to perform the first environmental monitoring of a nodule collector vehicle in the deep ocean in over 40 years.

This research was supported in part by the MIT Environmental Solutions Initiative, the UC Ship Time Program, the MIT Policy Lab, the 11th Hour Project of the Schmidt Family Foundation, the Benioff Ocean Initiative, and Fundación Bancaria “la Caixa.”

Reading this makes me feel uneasy.
Even if western companies take care over that they are doing, who is to say that the rest of the world will do so.
When you are 4.5 km under the surface, who can keep an eye on you ?
[ NATO perhaps ]

no nickel or Cobalt in iron phosphate

What are the possible chemical consequences be on the surrounding ocean when done on a large scale?

Also, what would happen if the discharge exceeds the balance point?