Solid-state battery developer Quantumscape reported that it has made and is currently testing its first 10-layer cells in a commercially relevant (70x85 mm/ 2.8x3.4 inches) form factor. The cells are being tested at 1C and C/3 (one- and three-hour charge and discharge) rates under standard temperature (25 °C) and pressure (3.4 atmospheres). Quantumscape believes these conditions are relevant for automotive applications.

The 10-layer cells demonstrate early capacity retention and recycling behavior similar to what Quantumscape has already shown for single- and four-layer cells.

In its Q2 2021 letter to shareholders, Quantumscape said that the 10-layer results were enabled by a series of manufacturing innovations resulting in a step-function improvement in separator consistency and quality—a key recent focus of the development team. Leveraging the reusable prismatic can package design introduced earlier this year, contributed as well; Quantumscape is using this package design for both 4- and 10-layer cells. 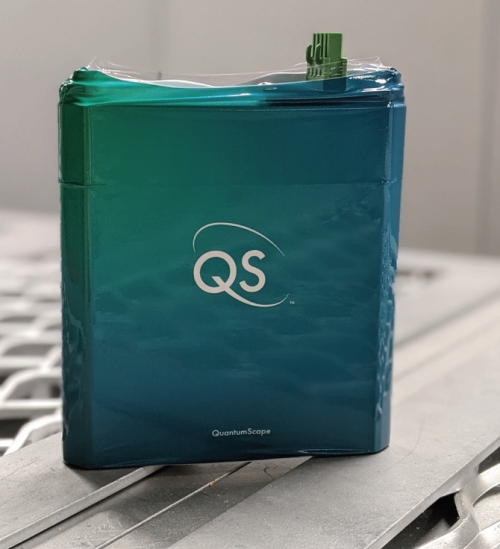 We had set ourselves the goal of showing results from 10-layer cells by the end of 2021, so we are encouraged that we have the first 10-layer cells this early. This reflects a rapid rate of progress over the last few quarters, with single-layer results in December, followed by four-layer results in February, and now 10-layer cells in July. We will seek to continue to improve the performance of the 10-layer cells through the rest of 2021, including ongoing improvements to the quality, consistency, and throughput of our separator, demonstrate several dozen layers in 2022 and produce test cells for vehicles on our QS-0 pre-pilot production line in 2023. We believe accomplishing the improvements described above and translating them to our new, higher throughput tools will be key to achieving our goals for this year and next.

LFP cathode. Quantumscape also announced that it made and tested an anode-free lithium-metal cells with a low-cost iron phosphate (LFP) cathode and confirmed that its chemistry and cell design are compatible with LFP.

A lithium-metal anode is a natural fit for a lower voltage cathode chemistry like LFP, which would otherwise need thick conventional anodes to deliver high energy. We believe this demonstrates the commercial flexibility of our cathode-agnostic solid-state lithium-metal platform, which allows us to extend our product offering to a broad spectrum of the automotive market.