Contemporary Amperex Technology Co., Ltd. (CATL) unveiled its first-generation sodium-ion battery, together with its AB battery pack solution—which is able to integrate sodium-ion cells and lithium-ion cells into one pack.

The sodium-ion battery has a similar working principle to the lithium-ion battery; sodium ions shuttle between the cathode and anode. However, compared with lithium ions, sodium ions have a larger volume and higher requirements regarding structural stability and the kinetic properties of materials. This has become a bottleneck for the industrialization of sodium-ion batteries.

CATL has been dedicated to the research and development of sodium-ion battery electrode materials for many years. In terms of cathode materials, CATL has applied a Prussian white material with a higher specific capacity and redesigned the bulk structure of the material, which the company says solved the worldwide problem of rapid capacity fading upon material cycling.

For anode materials, CATL developed a hard carbon material that features a unique porous structure, which enables the abundant storage and fast movement of sodium ions, and also an outstanding cycle performance. The specific capacity of the material can reach more than 350 mAh/g. The overall performance is similar to that of graphite.

CATL developed a unique electrolyte system for the cathode and anode materials. 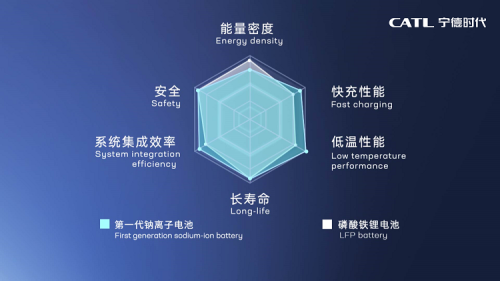 The first generation of sodium-ion batteries can be used in various transportation electrification scenarios, especially in regions with extremely low temperatures, where its advantages become obvious. Also, it can be flexibly adapted to the application needs of all scenarios in the energy storage field, CATL says.

CATL says that its next generation of sodium-ion batteries will exceed 200 Wh/kg.

The AB battery system solution can compensate for the current energy-density shortage of the sodium-ion battery, and also expand its advantages of high power and performance in low temperatures. Thanks to this innovative structure system, application scenarios for the lithium-sodium battery system are expanded. 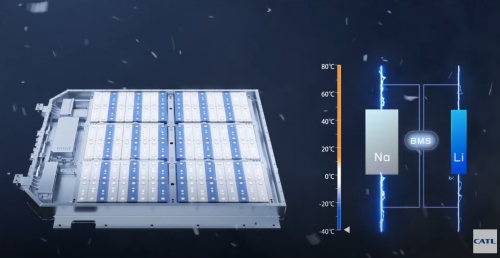 Dr. Qisen Huang, deputy dean of the CATL Research Institute, said that sodium-ion battery manufacturing is perfectly compatible with the lithium-ion battery production equipment and processes, and the production lines can be rapidly switched to achieve a high-production capacity.

I'd see this as one of the chemistries with genuine potential to move things on.

My understanding, although I have not looked into it in depth, is that this could be way cheaper than lithium ion, due to lower material costs, which is the real show stopper and why huge subsidies and mandates are needed to force BEVs on people.

A summary would be really helpful.

It looks like it is mainly for stationary storage:

Cell costs are not pack sales prices, but even so, that is getting there!
Woo-hoo!

The Cathode is Prussian white material (NaxFe[Fe(CN)6]y·nH2O) and the anode is a hard-carbon electrode. Low cost materials that have already demonstrated long cycle lives and fast charge/discharge cycles.

At 160 Wh/kg at the cell level, this battery can be used in EV. The Nissan Leaf 40kWh battery is 132 Wh/kg at the battery pack level, CATL "Cell-to-Pack" can achieve this weight energy density (85% of cell energy).
The CATL LFP battery used in the Tesla 3 Made in China has only 165 Wh/kg (140 Wh/kg at the pack level). So the Gen 2 could easily handle that requirement.
(Check out Moneyball -"LFP Tesla Model 3 — Nothing to See Here", https://moneyballr.medium.com/lfp-tesla-model-3-nothing-to-see-here-8c241ef38399).

Yep, some sort of long range BEV can be done at that energy density.
I would see this with its high cycle life characteristics as perhaps better for PHEVs though, where 15-20KWh can do the job.

I was trying to find out the weight of the 18KWh battery pack in the Toyota RAV4 Prime, but did not have any luck.

Of course there is going to be a trade off made to build packs suitable for the high cycle life needed in a PHEV against weight per KWh, but I did not manage to find any parameters.