Proman has finalized an agreement to build two additional 49,900 dwt methanol dual-fuel MR tankers, bringing its total investment in methanol-powered vessels to six newbuildings. Proman will be the sole owner of the Provident and Progressive, alongside the Promise which is due to be delivered in Q3 2022. 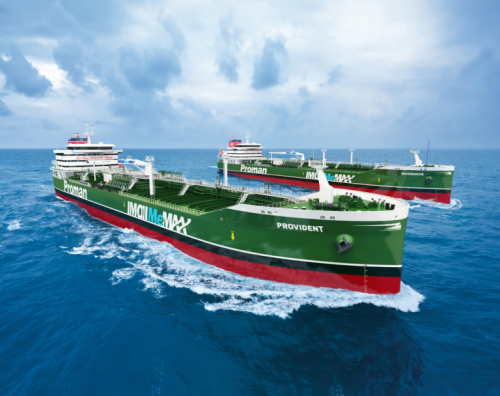 The new vessels will also be built at Guangzhou Shipyard International (GSI), for delivery in Q4 2023.

The Provident and Progressive will be traded globally for shipping chemicals and clean petroleum products, enabling shipowners worldwide to experience the benefits of these state-of-the-art and 100% renewable-ready methanol-powered vessels.

Each vessel will use approximately 12,500 tonnes per year of methanol as a marine fuel. Using widely available grey methanol produced from natural gas, greenhouse gas (GHG) emissions in the vessels’ normal commercial operations will be significantly reduced compared to conventional marine fuels, including the virtual elimination of sulphur and particulate matter, 60% reduction of nitrogen oxide and 10-15% cut in carbon dioxide.

Proman will continue to work with with Stena Bulk for project management of the shipbuilding. Stena will also provide ship management services for the Promise, Provident and Progressive via its subsidiary Northern Marine.