Toyota Motor Corporation will enter a vehicle equipped with a developmental hydrogen-fueled engine at the five-hour-long Super Taikyu Race in Autopolis, which takes place from 31 July to 1 August 2021. The hydrogen engine is being developed as part of Toyota's efforts to realize a carbon-neutral mobility society.

Just as in the previous round, the vehicle will be entered under the ORC ROOKIE Racing banner, and Toyota President Akio Toyoda will participate in the race as the driver Morizo. By entering a hydrogen-powered vehicle that uses green hydrogen produced locally in Kyushu, Toyota intends to further strengthen the hydrogen-centered partnerships it enjoys with other industries in Kyushu. 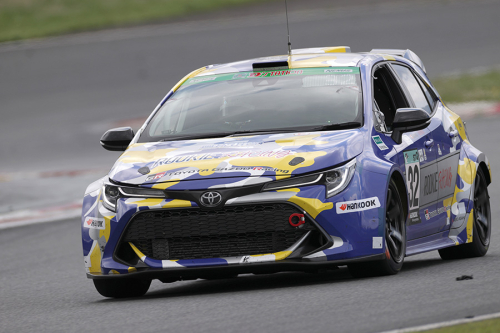 The hydrogen engine Corolla participated in its first race at the Fuji SUPER TEC 24 Hours Race, which took place at Fuji Speedway on 21 May, with the goal of accelerating the pace of development of its hydrogen engine. In the two or so months since the race, Toyota has implemented a number of improvements both to the car and to its related hydrogen infrastructure.

Improvements implemented over the last two or so months:

By participating at Autopolis, Toyota hopes to identify any potential issues under tough conditions, and so accelerate the pace of its development. The company will also procure green hydrogen produced locally for local consumption,

In Kokonoe Town, Oita Prefecture, Obayashi is engaged in a demonstration project for the integrated production of green hydrogen using geothermal power for the first time in Japan, and the supply of this green hydrogen to various customers.

"Toyota President Akio Toyoda will participate in the race".
Noticed this on NHK TV (here is another reference: "Hydrogen-fueled Toyota vehicle conquers 24-hour endurance race", https://www.asahi.com/ajw/articles/14362893).
The article points out- “We will increase options for decarbonization technologies,” said Toyota President Akio Toyoda, who also served as a driver in the endurance race. “And we have just taken the first step.”
So which tech do you think he prefers?

I like the way Toyota pursue decarbonisation through all means, not cherry picking.
Cummins are also going for hydrogen ICE for heavy trucking, as well as fuel cells.

How about this if you can solve the H2 Infrastructure issues and use Blue H2 or Geothermal H2 ("Toyota in on geothermal generated hydrogen project", https://www3.nhk.or.jp/nhkworld/en/news/20210801_07/).
An H2 ICE has two problems vs an FCE: low efficiency and a corresponding greater H2 storage requirement.
First, use an HCCI engine like the Mazda SPCCI Skyactive-X engine (not far off, read "2022 Mazda6 With A Toyota Straight-6/RWD Smokes Mercedes",https://www.motorbiscuit.com/2022-mazda6-with-a-toyota-straight-6-rwd-smokes-mercedes/).
Second, use LOHC instead of Compressed H2. LOHC needs 200 degrees C for H2 release. Not easy on a PEMFC, on ICE use exhaust heat recovery.
A 400hp inline 6, SPCCI hybrid H2 Toyota Tundra would be an interesting application.

You are correct sd, Toyota has no BEVS, they missed the boat.

I remember back in 2000, when the Prius came out, GM called it a money losing gimmick. They said they would very soon have a hydrogen vehicle.

Our PNGV program led to the Prius.