Micro-mobility company Helbiz is exploring the electrification of its fleet with Lightning eMotors. Following the completion of the current pilot program, Helbiz plans to deploy Lightning Electric Ford Transit 350HD vans throughout Miami and Washington DC to manage its intra-urban operations. These zero-emission electric vehicles will replace the existing gas-powered vehicles that are used to pick up, transport and drop off Helbiz electric scooters and bikes across each city. 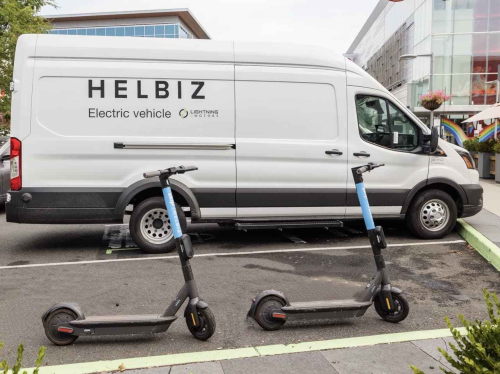 The new vehicles are capable of achieving 61 MPGe, compared to 13 MPG for gasoline-powered vans. They also include Lightning eMotors’ proprietary telematics and analytics software, which will aid with route optimization and vehicle efficiencies, providing additional support for the drivers.

The vehicles being deployed by Helbiz are Lightning eMotors’ Class 3 cargo vans with 86 kWh of battery capacity and a proven range of 120-plus miles, offering peak power of 160 kW (equivalent 215 horsepower), and a torque rating of 994 N·m (733 lb-ft).

Looking ahead, Helbiz plans to deploy Lightning eMotors’ vans throughout each city in the United States in which it operates.

EV transit vans would be good for home delivery