Itochu Corporation and Irkutsk Oil Company (IOC); Japan Oil, Gas and Metals National Corporation (JOGMEC); and Toyo Engineering Corporation (TOYO) have agreed to undertake a detailed study for the commercialization of a blue ammonia value chain between Eastern Siberia and Japan. This study will be Phase 2, following Phase 1 implemented in 2020.

As in Phase 1, TOYO and Itochu will implement the Phase 2 study on behalf of JOGMEC and will establish a master plan for the value chain that converts natural gas produced by IOC in Eastern Siberia into ammonia and transports it to Japan. 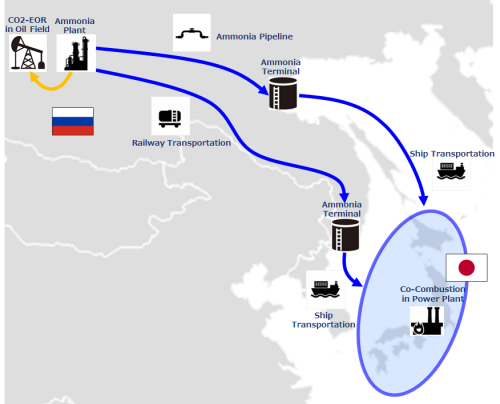 In Phase 2, to commercialize a large-scale blue ammonia value chain from Eastern Siberia to Japan, a conceptual design to produce ammonia from natural gas produced in IOC’s oil fields in Eastern Siberia will be executed.

In this conceptual design, it is expected that CO2 emitted during the production process of ammonia will be utilized for carbon dioxide enhanced oil recovery (CO2-EOR) to increase oil production in the oil and gas fields in Eastern Siberia owned by IOC or, with other carbon capture, utilization and storage (CCUS) methods also employed.

For the inland transportation of ammonia, a railway cargo or pipeline are envisaged. The study will adopt with a gradual approach to consider the timeline of value chain commercialization.

Itochu has an extensive track record in the trade of crude oil, petroleum products, LNG, LPG and other commodities, and in addition to its knowledge of logistics optimization, it operates a joint venture with IOC to explore, develop and produce crude oil in Eastern Siberia.

Itochu aims to achieve the production and efficient transportation of ammonia, which is expected to find new demands and markets as a fuel of the future, given actions to address environmental issues, and will work to achieve the stable supply of blue ammonia to the Japanese market.