Repsol is the leading producer and consumer of hydrogen in the Iberian Peninsula and operates the largest hydrogen plant of Europe. The company uses this gas as a raw material at its industrial centers which are already evolving to become multi-energy hubs where renewable hydrogen is a strategic pillar in achieving net-zero emissions by 2050.

Repsol announced in November 2020, in its Strategic Plan, that it wants to play a leading role in renewable hydrogen, to be at the forefront of the market in the Iberian Peninsula. To do so, it will have an installed capacity of 400 MW by 2025 and will exceed 1.2 GW by 2030.

For its part, Talgo is developing hydrogen-powered trains that will make it possible to de-carbonize railway lines, especially those of the secondary network that are not electrified. To this end, it has developed its Vittal One train, a modular solution for medium-distance and commuter trains powered by hydrogen fuel cells, which will be a dual hydrogen-electric train.

The company is also planning to put on track next November a first train that will allow demonstrating and validating the concept in conditions similar to those of commercial operation.

The alliance between the two companies provides a comprehensive solution to making renewable hydrogen-powered trains a reality. Talgo will handle the design, manufacture, and commissioning of the new self-propelled trains for short and medium distances, while Repsol will offer up its renewable hydrogen generation infrastructure and the company’s logistical means to supply the railway network.

This collaboration will promote the achievement of one of the objectives set in the Hydrogen Roadmap approved by the Spanish Government last October: to have two lines of hydrogen-powered commercial trains by 2030.

The Vittal One renewable hydrogen-powered train uses electric motors powered by hydrogen fuel cells. This type of train can run on non-electrified tracks and without the need to install a catenary or make any other type of modifications. As such, it is a mobility solution that doesn’t need long additional developments. It also benefits in particular those regions connected to secondary rail lines that have not yet been electrified, by allowing a quick and easy implementation of decarbonized mobility. 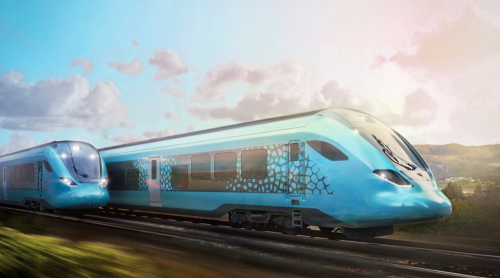 Repsol will use organic waste to generate biogas at its industrial centers, which will be used to produce renewable hydrogen. It has announced the installation of two electrolyzers with a capacity of 100 MW in Cartagena and Petronor that will supply its complexes with renewable hydrogen. In addition, the multi-energy company fosters and promotes large ecosystems across the hydrogen value chain, where supply and demand are adjusted, and technological development, investment, and public-private sector collaboration come together. This type of initiative puts Spain at the forefront of renewable hydrogen production in southern Europe.

These initiatives include the Basque Hydrogen Corridor, launched in February 2021 by Petronor-Repsol and which already brings together 128 companies (Talgo is included among others); the Hydrogen Valley Catalonia, coordinated by the Universitat Rovira i Virgili, Repsol, and Enagás, whose objective is to consolidate an integrated ecosystem in the region around the hydrogen value chain, the renewable hydrogen hub around the Escombreras Valley, in Cartagena; and the Hydrogen cluster of Castilla-La Mancha, with the installation of a renewable hydrogen production plant using photoelectrocatalysis, a technology that Repsol is developing together with its partner Enagás, which will place the Puertollano Industrial Complex at the forefront of the sector.

I think it is now clear that FCEV trains are going to displace diesel in non electrified lines in Europe and presumably China etc.

The situation in the US may be different due to the very low price of NG, perhaps.

The provision of hydrogen for trains by itself apart from the efforts for heavy goods vehicles is going to greatly enhance supply outside of the chemical industry.

In the longer term, they would probably be better off both in terms of economics and energy use to use batteries and short sections of catenary if necessary. Use the hydrogen to make fertilizer or cement, etc

That is not what the figures show for Europe. Here are links to the studies:

Save for shunter trains, batteries don't really come into it.

Fuel efficiency is not the only metric, and installing catenaries is not cheap.

The engineers do do their calculations.

The deepest interests of a H2 infrastructure are fostered from proponents of the fossil fuel industry. For the greatest part, it would allow them a continuation of their present economic policies and established infrastructure.
"The engineers doing their calculations" are on the payroll of these irresponsible and greedy "Top Managers".

No thought is necessary or even possible when paranoia has won.

Unfortunately one of the biggest obstacles to dealing with AGW is innumerate and irrational greenloons.

I looked at your reference. It should be noted that it was written by a fuel cell group.

Many if not most European routes probably start with a major city with sections of catenary and it would probably cost less in the long run to provide a short section of catenary in stations if needed.

I don't have a dog in the fight, and am perfectly happy for catenery systems to be used where they work.

80km is a pretty limited range though, which is why fuel cell systems are being ordered , AFAIK, in France, Spain, Germany and the UK

I would imagine that higher traffic routes might justify the capital expense of caternaries, whilst longer distance and lighter traffic might be more suitable for fuel cells.

"No thought is necessary or even possible when paranoia has won."
You're describing yourself very fittingly.

Battery should work well for trains, due to much greater efficiency of trains than cars or trucks in term of payload-mile for a given amount of energy. The impact of the heavy weight of the batteries on payload capacity should be a lot less for trains than for long-haul trucks.
Furthermore, train cars that contain batteries or H2-FC can be readily coupled and de-coupled at train stops, thus allowing rapid battery and H2-FC train car swapping, thus battery-operated train can rival the convenience of rapid fill-up of diesel or H2.
In an ALL-RE future, I would imagine seeing:
1.. the use of battery for trains during Springs and Falls when there will be an excess of RE electricity from solar and wind due to mild temperatures, thus cheap electricity.
2.. In Summers and Winters, the cost of RE electricity will be high due to excessive demand relative to supply, thus it may be cheaper to use H2-FC during this time, in order to avoid over-burden the grid that is usually highly strained in seasons of high electricity demand.