A new report from the US Department of Energy (DOE) Co-Optima initiative identifies the top 13 diesel fuel blendstocks from biomass resources that could reduce harmful emissions from medium- to heavy-duty diesel vehicles. The top 13 blendstocks include hydrocarbons, esters, and ethers that have the potential to reduce GHG emissions by at least 60% and be produced at a competitive cost.

The blendstocks could also make the emissions control system simpler and less expensive to operate. Together, the improvements could translate to lower costs for industry and consumers. 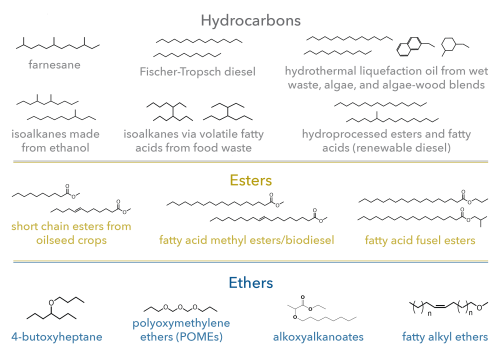 Lower engine-out emissions can be cheaper to operate and potentially a little more efficient, and using blendstocks made from biomass and waste means lower well-to-wheels GHG emissions.

Co-Optima (Co-Optimization of Fuels & Engines) is a collaboration among multiple DOE national laboratories, universities, and industry to accelerate the development of affordable, scalable, and sustainable biofuels along with high-efficiency, low-emission vehicle engines. The work is sponsored by DOE’s Vehicle Technologies Office and Bioenergy Technologies Office.

Along with minor engine operation adjustments, reducing soot produced in the engine can also decrease production of NOx.

Researchers then used computational and experimental methods to screen thousands of blendstocks against the target values to determine which of them had the greatest potential to improve performance and reduce emissions. To evaluate the potential of different classes of molecules to reduce soot and NOx, the team conducted tests in single-cylinder engines, including conventional and a new type of engine called ducted fuel injection. Next, the team conducted technoeconomic and life cycle analyses on the most promising candidates to evaluate their market potential, scalability, and sustainability.

The most promising blendstocks fell into three categories:

The eight blendstocks that met the fuel property requirements and have minimal barriers to adoption include six hydrocarbons and two esters:

One additional ester and five ethers were identified with significant potential to reduce emissions but with at least one significant barrier to adoption and use identified. These blendstocks include short-carbon-chain esters produced from oilseed crops, 4-butoxyheptane, polyoxymethylene ethers and end-exchanged derivatives, a family of alkoxyalkanoates derived from fusel alcohols and lactate esters, and fatty alkyl ethers.

The Co-Optima team determined that the identified blendstocks have the potential, consistent with industry targets, to increase indicated brake thermal efficiency by up to 1%, reduce particulate matter emissions by 50% to 99% and NOx emissions by 50% to 99%, and are likely compatible with the fuel infrastructure and legacy fleet, while reducing GHG emissions by 62 to 89%.