Hyundai becomes a partner in H2 MOBILITY in Germany

Hyundai Motor become a partner in H2 MOBILITY, a company that sets up and coordinates the nationwide hydrogen infrastructure in Germany. (Earlier post.) The Hyundai Motor Company will be represented by Hyundai Motor Deutschland GmbH at the shareholders’ meeting. Hyundai is the seventh shareholder alongside the founding members Total, Shell, OMV, Linde, Air Liquide and Daimler. 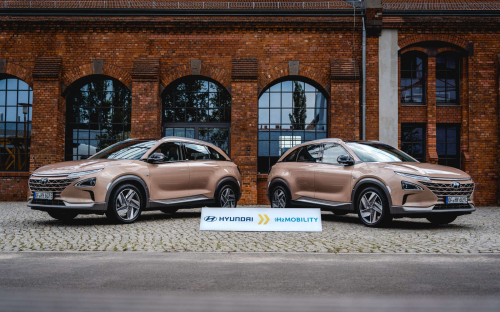 Hyundai has been an associated partner of H2 MOBILITY since 2017 and has been actively involved in the development of a hydrogen infrastructure in Germany ever since. By signing the partnership agreement, the company is once again underlining its commitment to hydrogen fuel cell technology. The establishment of a functioning and comprehensive network of hydrogen filling stations is fundamental in order to further establish the Hyundai fuel cell electric vehicles successfully on the market.

The decision to join, after many years of partnership, is based on H2 MOBILITY's extensive experience in setting up an infrastructure for hydrogen. H2 MOBILITY has been building and operating the hydrogen filling station network in Germany since 2015. As the world’s largest operator, the company is currently responsible for 91 hydrogen filling stations, most of them in Germany in the metropolitan areas of Hamburg, Berlin, Rhine-Ruhr, Frankfurt, Nuremberg, Stuttgart and Munich as well as on the adjacent motorways. Another two filling stations are in the planning phase, 10 in the approval phase. Three are about to go into operation.

Hyundai is a leader in the development, mass production and export of hydrogen fuel cell systems, including fuel cell electric vehicles. With the XCIENT Fuel Cell, Hyundai has been using the world’s first series-produced, hydrogen-powered heavy-duty vehicle in Switzerland since 2020. Hyundai plans to deliver 1,600 units of the fuel cell truck to Europe by 2025. In Munich, the Hyundai Motor Company has been using the hydrogen-powered ELEC CITY Fuel Cell Bus in test operation on a daily basis together with two bus companies for several weeks. The test operation is intended to prove that hydrogen-powered buses are a practicable and efficient solution for commercial passenger transport.

In order to further advance the transition to a provider of smart mobility solutions, the company is not only focusing on the construction of emission-free vehicles, but also on the necessary infrastructure. With the entry into H2 MOBILITY, Hyundai is taking on a more active role.

H2 MOBILITY Deutschland GmbH & Co. KG focuses on the nationwide development of a hydrogen infrastructure in Germany. The aim is to initially operate 100 stations in seven German metropolitan regions (Hamburg, Berlin, Rhine-Ruhr, Frankfurt, Nuremberg, Stuttgart and Munich) as well as along motorways and major federal highways. H2 MOBILITY takes on all the necessary tasks from planning to construction to operation and marketing, which are necessary for the successful network expansion and operation of a hydrogen filling station network.