Bluejay Mining, an exploration and development company with projects in Greenland and Finland, announced a joint venture agreement with KoBold Metals, a mineral exploration company that uses machine learning to guide exploration for new deposits rich in the critical materials for electric vehicles.

This agreement brings a globally significant partner to Bluejay’s Disko-Nuussuaq nickel, copper, cobalt, platinum (Ni-Cu-PGM-Co) magmatic massive sulfide (MMS) project, located on the southwest coast of Greenland. Disko is circa the size of Luxembourg, with the largest anomaly being more than 6 km long.

Under the terms of the agreement, KoBold can earn 51% of Disko through a two-stage earn-in. Bluejay can maintain a 49% interest through proportionate funding of the project and will manage field operations during this period.

The Disko region has seen the rare convergence of events in earth’s history that could have resulted in forming a world-class battery metal deposit. KoBold’s technology is perfectly suited to discovering new resources at Disko. Our proprietary library of analytical tools, Machine Prospector, will enable effective deployment of exploration capital and maximize our chances of discovery at Disko-Nuussuaq.

We are excited to invest in Greenland’s emerging mineral sector and to partner with Bluejay in light of their strong track record in Greenland and the outstanding potential of the Disko project.

Disko is a project with great potential for the discovery of globally significant deposits of battery metals. It is, however, this scale that necessitated a financially and technically strong partner to develop Disko. After many conversations with many groups from all over the world we are pleased to enter into partnership with a group that shares our position on fairness and providing a transparent long-term outcome for shareholders as well as being a credible and reliable partner that shares our commitment to environmental sustainability. I am very pleased to say that we have achieved this now with KoBold, an organization with the heft and technical capability to grow this project to its full commercial potential. We are extremely excited to be working with them.

The Disko-Nuussuaq Property is centred in a region of extensive contaminated and metal-depleted volcanic centers where there is clear evidence for the equilibration of flood basalt magma with crustal sulfur with potential for the concentration of magmatic sulfides in shallow sub-volcanic intrusions. The rich inventory of government and exploration data provides an excellent starting point for KoBold to utilize proprietary technology to support exploration.

After working on the Nori’sk mineral system and applying the ideas to help Falconbridge with their exploration work, it is exciting to see this work come to fruition.

Notably for the Disko-Nuussuaq Project, KoBold’s nickel expert Dr. Peter Lightfoot was earlier involved with the historical Falconbridge campaign at Disko-Nuussuaq during the 1990s and, moreover, has been part of a team that has identified major discoveries in every one of the cobalt-producing nickel-copper sulfide belts in Canada.

KoBold’s in-house developed machine learning and artificial intelligence data technologies, TerraShed and Machine Prospector, have been built from scratch by alumni of top Silicon Valley software companies to guide every aspect of mineral exploration as well as mine development and operations.

TerraShed integrates all types of geoscientific data into a single system for quality control, visualization, and predictive modeling. KoBold’s proprietary suite of analytical tools, Machine Prospector, interrogates the data with techniques from computer vision to ensemble machine learning to stochastic inversions, to predict the locations of orebodies and the critical controls on ore formation.

KoBold was recognized in 2021 as a Technology Pioneer by the World Economic Forum and as one of the 100 most promising private artificial intelligence companies in the world by CB Insights—and the only one within the mining industry.

The Disko-Nuussuaq Project. The Disko-Nuussuaq Project is hosted within the West Greenland Tertiary Igneous Province. This province is a well-recognized geological analogue to the Siberian Flood Basalts of the Noril’sk Region. Previous studies and work conducted by the company highlighted the similarities between the geology of the Noril’sk Region of Siberia, which is the marginal producer of nickel and palladium, and Disko-Nuussuaq. This is supported by multiple peer reviewed scientific studies.

Comparing global reserves plus resources the Noril’sk camp contains 15% of the global resource of sulfide nickel, 27% of the total global palladium resource, and 30% of the global resource of magmatic sulfide-hosted copper. Based on estimates of combined reserves, resources, and historic production, the total value of the ores in the Norilsk district in 2020 metal prices is US$1.4 trillion. 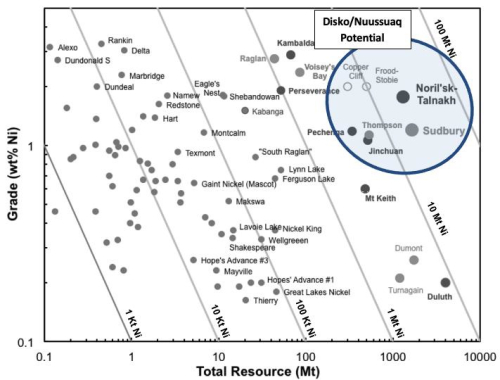 Initial investigations at Disko-Nuussuaq date back to the discovery in 1870 of the 28-tonne Illukunguaq Boulder of massive sulfide assaying 7% nickel, 3% copper and 512 grams per tonne (g/t) cobalt, as well as more than 2.0 g/t platinum group elements. Following this, more than 30 years of exploration by companies, including Cominco and Falconbridge, but also more recent work by Vismand Exploration and Cairn Energy backed Avannaa Resources, as well as government-backed work and data acquisition by the Geological Survey of Greenland/Geological Survey of Denmark, has resulted in a vast amount of scientific data (both geological, geochemical, and geophysical) all pointing to a process producing a globally significant accumulation of metals. The total cost of this multi-decade data acquisition and field work represents millions of dollars of total expenditure.

Detailed geochemical mass balance calculations on the Kukunguaq Member sulfide-saturated contaminated basalt sequence indicates that between 12-16 million tons of nickel metal are missing from lavas extruded from the mantle. The most likely explanation for this is that these metals have precipitated as nickel and copper sulfides proximal to the main volcanic vents and other structural corridors which controlled the migration of magma. Bluejay licence areas cover all of the currently known contaminated and metal-depleted volcanic centers on Disko and Nuussuaq.

Bluejay’s assessment and investigation over the last several years has identified more than 20 drill-ready targets on licence holdings at Disko-Nuussuaq. Of the targets defined, notably, there are seven large conductive targets previously defined by Vismand Exploration and Avannaa Resources and reconfirmed by Bluejay.

The two largest conductive targets are extraordinary in scale, the largest being more than 10.0 km long and around 2.0 km wide and another being around 4.8 km long and 800 meters wide; both comparable in footprint to the world-class Noril’sk-Talnakh ore bodies.

Bluejay licence position at Disko-Nuussuaq. Bluejay’s 2,897 km² Disko-Nuussuaq holding includes several separate licences awarded by the Government of Greenland. The first licence holdings at Disko-Nuussuaq were purchased by Bluejay in 2017 from Capricorn Oil Limited, a subsidiary of Cairn Energy PLC, which was the licence holder at the time, after the oil and gas exploration and development company, Cairn, ceased its offshore activities in West Greenland. At the same time, it also ceased funding its parallel onshore mineral exploration vehicle and operator, Avannaa Resources Ltd.

The transaction included all licences at Disko-Nuussuaq as well as licences at the Kangerluarsuk zinc-lead-silver-copper project, located north of the former famous and most profitable historical mine in Greenland, the Black Angel zinc-lead-silver mine. The acquisition price was £500,000.

The initial licence holding at Disko-Nuussuaq was expanded by Bluejay in 2017, 2018 and 2020 to the current total holding of 2,897 km². The Bluejay licence holdings are concentrated over the most prospective settings/contaminated basalt, as well as targeting the larger fault-systems & magmatic pathways.

Bluejay’s land holdings also host most of the previously recognized magmatic sulfide and native iron boulders and native iron occurrences. Moreover, the Bluejay licence ground was acquired in areas where valleys incised into the flood basalts that reduces the drill depth to potentially mineralized subvolcanic intrusions. All licences have access to a deep-water fjord or deep open water and can be operated from either land or boat/barge-based camps. 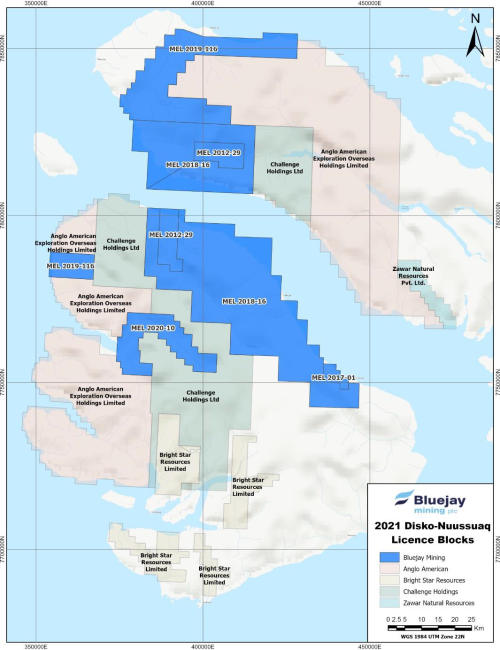 From the later part of 2019 and into 2021 Disko-Nuussuaq has seen a licence acquisition race—meaning that Bluejay’s first-mover holdings have been surrounded by other licence holders. Notably, Anglo American holds an area of almost 10,000 km².