“Blue” hydrogen—produced through steam methane reforming (SMR) of natural gas or coal gasification, but with CO2 capture and storage—is being described as having low or zero carbon emissions.

However, a new lifecycle study by a team from Stanford University and Cornell University has concluded that total greenhouse gas emissions from the production of blue hydrogen are quite high, particularly due to the release of fugitive methane. The open access paper by Cornell’s Robert Howarth and Stanford’s Mark Jacobson is published in the journal Energy Science and Engineering.

For our default assumptions (3.5% emission rate of methane from natural gas and a 20-year global warming potential), total carbon dioxide equivalent emissions for blue hydrogen are only 9%-12% less than for gray hydrogen.

While carbon dioxide emissions are lower, fugitive methane emissions for blue hydrogen are higher than for gray hydrogen because of an increased use of natural gas to power the carbon capture. Perhaps surprisingly, the greenhouse gas footprint of blue hydrogen is more than 20% greater than burning natural gas or coal for heat and some 60% greater than burning diesel oil for heat, again with our default assumptions.

In a sensitivity analysis in which the methane emission rate from natural gas is reduced to a low value of 1.54%, greenhouse gas emissions from blue hydrogen are still greater than from simply burning natural gas, and are only 18%-25% less than for gray hydrogen. Our analysis assumes that captured carbon dioxide can be stored indefinitely, an optimistic and unproven assumption. Even if true though, the use of blue hydrogen appears difficult to justify on climate grounds. 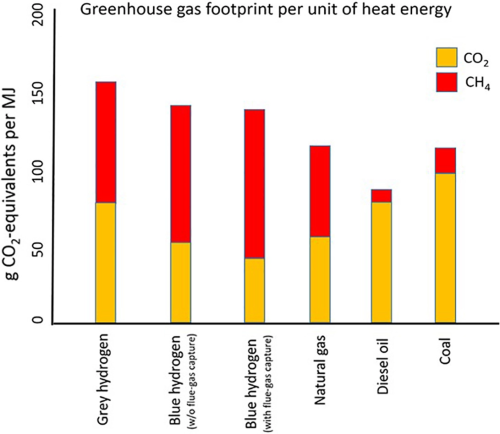 Concerning if true.
However my level of confidence in Jacobson is remarkably low:

This is a lawsuit he brought against scientific critics:

' In the text of his article, Jacobson describes no significant alteration to U.S. hydropower assets to make his system work. That’s important, because new hydro construction has essentially disappeared in recent decades due to environmental protections, cost of labor and other factors. Reliance on major hydro construction would render the roadmap considerably more difficult to achieve.

The authors of the critique noticed that a graphic in Jacobson’s article depicted instantaneous hydropower discharge at roughly 15 times the capacity listed in the study’s documentation.

This unexplained discrepancy, they argued, unraveled the entire premise. If Jacobson can’t balance the grid without an inconceivable and unexplained multiplication of installed hydro capacity, then one can no longer accept the conclusion that the 100 percent renewable grid is a realistic goal.'

If random claims and attempts to stifle scientific criticism is your thing, he is the very man.

It is conceivable that fixing GW is easy, not hard:

' Grow bioengineered Azolla, seaweed, kelp or create massive algae blooms and sink them to the bottom of the ocean. Algae blooms can be created in a day using iron fertilization. 100 tons of iron dust was placed into the ocean and it generated a 10 million ton algae bloom. It only took 5 guys on a small “Jaws” movie sized boat to sequester more carbon than the billion-dollar Weyborne project to capture fossil fuel emissions to sequester a million tons.

We should use the tried and true and natural method of planetary scale cooling. Grow and sink the right amount of plants to remove up to trillions of tons of CO2. Plant and algae growth is the proven way to remove CO2 from the atmosphere for billions of years. The world has cycled through dozens of cooling events. Grow a lot of plants and sink them in the ocean. The carbon gets stored at the bottom of the ocean and compressed at high pressures and then becomes part of the earth’s crust. We know that it works, it is good for the environment, it works at scale and it stays cooled for millions of years. '

I find I can't rule it out in principle.

..And a critique of iron seeding:

So something does not gel, if temperatures really were that much higher in the past as the first link claims, which ended it if not algae blooms as suggested?

Presently, the most viable and economical method for the fossil fuel industry to produce H2 is steam-cracking of NG. All other by-products are a nuisance. These are undesired, unwanted and useless. The cheapest and proven method is to "dump" them into the atmosphere. So what? What cannot be seen can do no harm. Right?

Australian scientists engineered bacteria to produce cheap H2.
https://lighthouse.mq.edu.au/article/september2/designer-bacteria-could-fuel-the-future-with-cheap-hydrogen
This method has no detrimental impact on our environment. Don't like it? Then keep your hands off of H2!

There is a much longer version of the article available in the New York Times.

I know that there are a number of hydrogen enthusiasts on this site but blue hydrogen never seemed to a good idea. I am always suspicious of the effectiveness of sequestering CO2 but the authors are arguing that the even is the sequestering is effective, the leakage of methane more than offsets this. Maybe pyrolysis of natural gas which yields solid carbon might be better but you still need to sequester the carbon (use it to back fill coal mines?) and it is probably more expensive than steam reforming. While pyrolysis might be better than steam reforming, it still requires natural gas and is not completely clean (I have seen it referred to as turquoise hydrogen). Also, in scale, it really would produce trainloads of carbon (American trainload is about 15,000 tons).

Also hydrogen is not an easy fuel to use. It leaks thru everything, causes steel embrittlement, the energy content per unit volume is very low even as a liquid and the liquid point is only 20 degrees above absolute zero. It is energy intensive to make especially as a liquid. I believe that the article mentions using hydrogen at a pressure of 3000 psi but 7000 psi is mare realistic. There are a number of industrial uses so we do need to make hydrogen.

Probably the best clean way to make hydrogen is high temperature electrolysis using nuclear power. Because some of the energy comes from the heat less electrical power is required. There is a proposed project in Wales that would combine a small modular nuclear plant with wind turbines. When there is sufficient wind, the wind turbines would supply base load power and the nuclear power would be used for high temperature electrolysis to generate hydrogen. When there is insufficient wind power, the nuclear plant would be used to supply the base load.

Bluewashing is the new Greenwashing

The existing NG infrastructure is a rather leaky one, with zillion miles of piping, with a lot of NG escaped into the atmosphere and become a strong GHG. By replacing NG in all these pipelines with H2, then the NG leakage problem will be much reduced. H2 is not a GHG, so H2 leakage is not contributing to GW as would NG leakage.

It is not honest to count the NG leakage problem in Blue H2 to be the same as NG leakage in a NG infrastructure, because there will be FAR LESS NG leakage once NG will be turned into Blue H2 at the near the gas wells, and the Blue H2 instead of NG will be pumped in pipelines to the end users. The CO2 will be immediately sequestered down into those deep oil and gas wells.

The upcoming American H2 infrastructure will support all colors of H2, from Grey, Gray, Blue, to Green Hydrogen. Before one can swim with Green Hydrogen, one must first jump into the water with Blue Hydrogen. Blue H2 for transportation will at least wean America off of imported oil and on the path toward energy security. Green H2 will come on strong once the H2 infrastructures will be in place to support it.