While OPEC+ recently agreed to production increases, these increases will not fully offset previous production cuts that OPEC+ imposed during the pandemic until well into 2022. At a critical moment in the global recovery, this is simply not enough.

… President Biden has made clear that he wants Americans to have access to affordable and reliable energy, including at the pump. … We are engaging with relevant OPEC+ members on the importance of competitive markets in setting prices. Competitive energy markets will ensure reliable and stable energy supplies, and OPEC+ must do more to support the recovery. 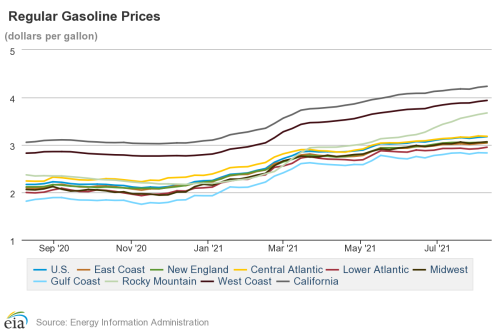 OPEC+ had agreed at a 18 July meeting to boost production by 400,000 barrels per day on a monthly basis through until December. OPEC+ is a group of 24 oil-producing nations, made up of the 14 members of the Organization of Petroleum Exporting Countries (OPEC), and 10 other non-OPEC members, including Russia.

On the same day as the statement from the Biden White House, the US Energy Information Administration (EIA) noted that in its August Short-Term Energy Outlook, it forecast larger than previously expected world petroleum inventory draws in 2021 and larger inventory builds in 2022. The changes are driven mostly by forecast changes to production from OPEC and Russia as a result of the 18 July agreement.

The EIA noted that concerns about decreased demand because of increasing COVID-19 cases have recently driven crude oil prices down, offsetting some initial price increases due to larger inventory draws. As a result, EIA’s crude oil price forecast remains mostly unchanged from the July STEO. However, it revised down its forecast for total world petroleum production. 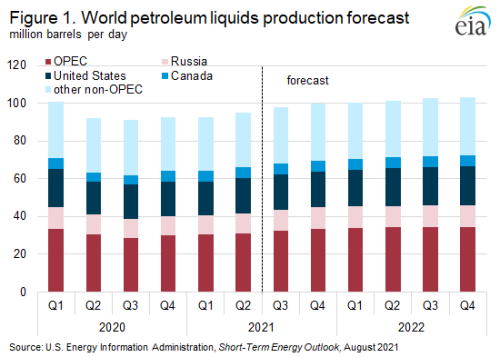 The Biden Administration immediately drew sharp criticism for the statement from a wide spectrum.

Feeling pressure from consumers faced with high gas prices and trying to recover from the economic devastation of 2020, the Biden Administration is now urging OPEC+ to increase production to ensure competitive energy markets. If the White House actually cared about Americans having access to “affordable and reliable” energy, as they claim in their statement, they would be taking every step necessary to facilitate increased production here in America and ease off their plans to regulate our domestic industry out of business.

This is an insult to Americans in rural communities who would have benefited from the Keystone XL pipeline and the energy workers in states like mine who are suffering from the effects of the Biden administration’s ongoing federal lease ban. Montana consumers are also hurting, paying almost 50 percent more for gas than they were a year ago.

If President Biden truly wants ‘affordable and reliable energy’ like he claims, his administration needs to encourage more energy development and infrastructure in America, not continue to illegally restrict it. Until he changes course, we will all continue to pay the price.

U.S. President Joe Biden issued a request on Wednesday to OPEC+ leaders, urging them to … produce more oil? Really? Just one day after the U.S. Senate voted to approve a massive $1.2 trillion “infrastructure” bill loaded up with incentives, mandates, subsidies and slush funds designed to stimulate the buildout of electric vehicles (EVs) and renewable energy in the U.S., the President wants the rest of the world to pump more oil.

… It seems instructive at this point to note that neither Biden or Sullivan issued any similar request to America’s own producers of oil and gas, who could, if they wanted to, significantly ramp up oil production here in the United States. Of course, this administration has been working at ensuring these domestic producers find it as hard as possible to increase their own production over the last 8 months, and plans to continue that work for at least three more years, so asking for more production from them would have been even more ironic than asking other nations to damage their own economies for America’s benefit, which is exactly what the White House is asking the OPEC+ nations to do with this request.

However, Blackmon noted, given the efforts that US producers have put into reining in drilling programs in favor of improving free cash flow and maximizing investor returns, they would likely be unwilling to raise production in response to a White House request.

On the other side, Kassie Siegel, director of the Center for Biological Diversity’s Climate Law Institute, told The Independent in a statement:

If Biden’s going to urge OPEC to increase oil production one day after the UN’s code red climate report, he may as well come to California and personally light more wildfires. This US statement is horrifying, and we won’t stand for it. We’ll hold Biden accountable to his promises to lead on climate. There is no way to address the climate emergency without limiting oil production. They are one and the same.

It’s just the height of hypocrisy, within months of cancelling KXL, to then turn around and ask OPEC to increase production. You can’t have it both ways. You can’t ask for increased production at the same time as talking about phasing out fossil fuels.