A study by researchers at CU Boulder and Edinburgh Napier University finds that high-density, low-rise environments such as those found in Paris are the optimal urban form when looking to reduce greenhouse gas emissions over their whole life cycle. 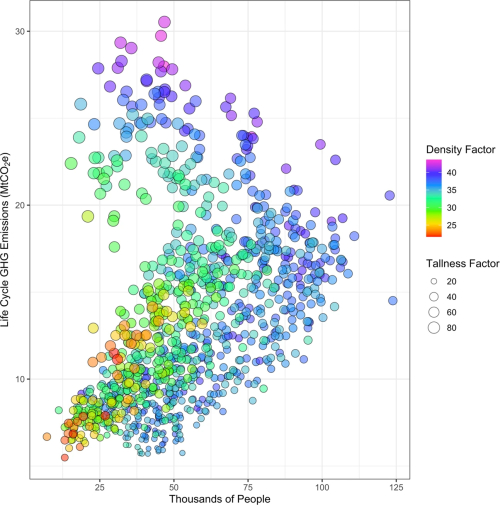 The work, recently published as an open-access paper in npj Urban Sustainability, contributes to a growing debate around the design of future urban environments. The built environment is a big contributor to carbon emissions, global energy demand, resource consumption and waste generation. In the US, it accounts for 39% of all greenhouse gases emissions, while in the European Union, it accounts for 50% of all extracted materials and 42% of the final energy consumption.

Jay Arehart, an author on the paper and instructor in the Department of Civil, Environmental and Architectural Engineering at CU Boulder, said the work challenges current conventional understanding that tomorrow’s cities must be densely packed and stretch upwards to address and curb greenhouse gas emissions. The idea being that tall buildings make optimal use of space, reduce operational energy use for heating and cooling and enable more people to be accommodated per square meter of land.

Both the urban sprawl that we see in the suburbs of the United States and the high-rise that we see in places like New York City are not necessarily optimal. We showed that new development should focus on minimizing whole-life carbon of buildings, not just the emissions from their operations or their materials. That density is needed for a growing urban population, but height isn’t. 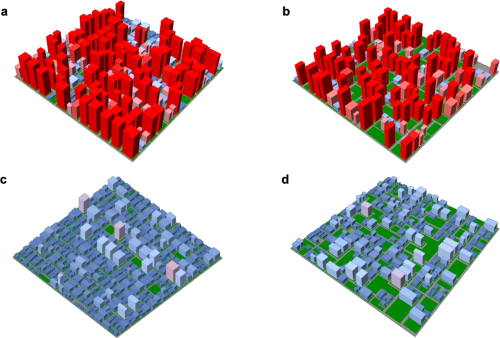 a HDHR, b LDHR, c HDLR, d LDLR. The height of each building is mapped to the color with blue as low heights and red as high heights. Pomponi et al.

The researchers simulated 5,000 environments based on real-world data to establish their lifecycle greenhouse gas emissions. This approach considered both premium for land (the extra land needed to build low-rise compared to high-rise) and premium for height (the extra materials to build high-rise compared to low-rise) to make comparisons fair, said Francesco Pomponi, the lead author on the paper and professor at Edinburgh Napier University.

We developed a novel urban density metric to measure things up as accurately as possible. Our results show that density is indeed needed for a growing urban population, but height isn’t. So it seems the world needs more Parises and fewer Manhattans—as much as I love New York—in the next decades.

Urban Sustainability is the newest addition to the Nature Partner Journals series.

How awful!
Fancy having to live in Paris analogues instead of Houston!

Through walking and cycling most places instead of driving, it might also have the unfortunate effect of increasing lifespans, so increasing population!

I intend to make a personal protest in France next year against their dreadful food and wine, by consuming it and thus disposing of it!

Not convinced that the paper has really included enough variables. High-rises are less likely to be demolished (or even significantly refurbished) and thus less has to be invested in their renewal per century. Materials are very important - the type of construction for a 10-storey is very much different than a 50-storey building. Few consider which is the smallest GHG product before actually designing and building. Older cities (or of a particular vintage) may not be as GHG considerate - so age matters. Also the economic density/ productivity/ opportunity of a city is likelier a more significant consideration than lifetime GHGs.

!! Yeah, the center of Paris as rebuilt by Haussmann has only been standing for 125 years or so, nothing compared to modern MacMansion builds for low density suburbs or the skyscraper skylines of most cities:

How long buildings last and their design lifespan depends on the codes in place at the time, and subsequent changes to regulations.

If we manage to introduce and internalise costings for lifetime GHG emissions, I can see no reason why 8 story or so buildings cannot be as efficient as any others.