Micromobility services Bird and Ford-owned Spin are the latest to integrate with Google Maps for Mobile (GMM). People using Google Maps for efficient and reliable journey planning are now able to discover Spin e-scooters and e-bikes and Bird scooters when given route options for their journeys.

Google Maps users are able to see, in real-time, the nearest available e-bike or e-scooter by provider, including how long it will take to walk to the vehicle, as well as the estimated battery range and expected arrival time. Users are then be directed to the appropriate app to pay for the vehicle, unlock it and take their ride. 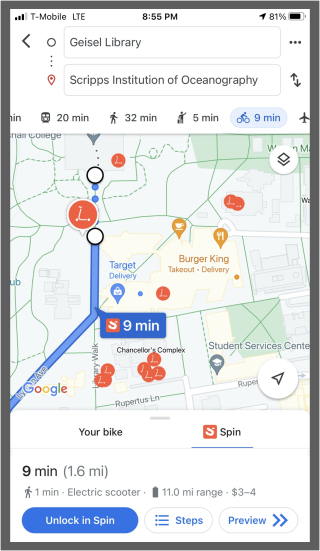 Lime led the way in December 2018 as the first micromobility provider to integrate with the mapping service.

The mechanism for integration is Google Micromobility, which allows the integration of an app or service information into Google Maps for Mobile (GMM). Micromobility partner integrations require the partner to upload their General Bikeshare Feed Specification (GBFS) feed frequently—at least every minute. These feeds enable Google to show direction results and vehicles in GMM without the need to access a third-party API.

GBFS is the open data standard for shared micromobility. GBFS makes real-time data feeds in a uniform format publicly available online, with an emphasis on findability. More than 601 bikeshare and scooter systems worldwide have adopted the GBFS open data standard since its release in November 2015, according to NABSA, the North American Bikeshare & Scootershare Association.

The data flow between the micromobility partner and Google.

Google Micromobility can only be used in countries that have the cycling feature available in Google Maps. Google plans to expand the feature to more countries.