UK-based CrownCruiser Motors has unveiled its eponymous e-bike on Indiegogo. Featuring a lightweight, ultra-strong monocoque carbon fiber frame, the CrownCruiser e-bike comes with a rider recognition anti-theft defense, GSM location tracking, and Bluetooth, complimented by a powerful app that tracks riding statistics. It also has a gyro accelerometer sensor that can detect an impact or fall and will pin drop your location to your emergency contact. 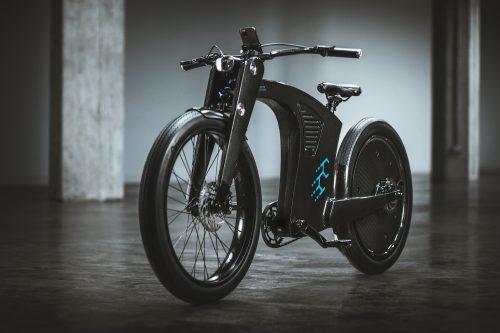 CrownCruiser’s brushless DC hub motor can deliver a maximum power output of 1000W and is available in two motor sizes (250W or 750 W). The first of these is used with the pedal-assisted system (PAS) which can produce speeds up to 15.5 mph.

Alternatively, combine the PAS with the throttle, and the 750W rear hub motor kicks in, allowing CrownCruiser to achieve speeds of up to 31 mph. The bike has a range of 100 miles at 15.5 mph (PAS), according to the company.

CrownCruiser Motors plans to install swap-and-go battery stations across cities to ensure users can switch a depleted 36V or 48V battery for a fully-charged power unit within seconds.

According to research by NPD Group and reported in the New York Times and Cycling Industry News, e-bike sales grew by 145% in the US between 2019 and 2020. The surge in popularity is being seen across Europe, too, with Cycling Industries Europe reporting e-bike sales are likely to hit 30 million by 2030—twice the number of cars currently registered across the continent.

CrownCruiser was shortlisted by Innovate UK’s Sustainable Innovation Fund and awarded £139,970 (US$192,000) to set up an operations and assembly center in Sheffield. The global crisis caused by the pandemic had a negative effects on many start-ups and such decision was intended to help products with innovative concepts become a reality.

The e-bike is currently available at a price point of $3,150 (half-price introductory offer).

This cost $3000 while on India such products are available at $ 1000 with bigger size and longer range. Cost needs to go down so that everybody can afford it.