Union Pacific approved to use up to 20% biodiesel in EMD locomotives, up from 5%

Progress Rail, a Caterpillar company, has approved the use of up to 20% biodiesel blend (B20) in specific EMD locomotive series operated by the Union Pacific railroad. Previously, the locomotives were approved to operate at 5%. 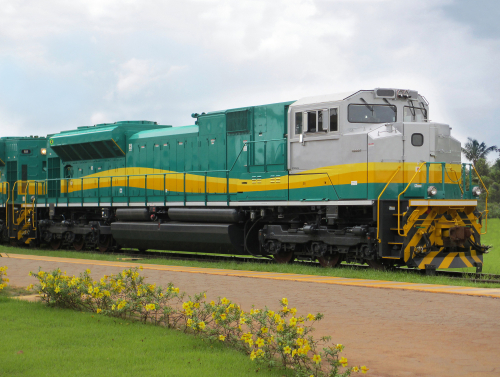 The updated fuel recommendation comes after testing high-horsepower locomotives, used for hauling freight long distances, and monitoring performance for things such as fuel consumption, as well as impact on engine oil and fuel filters. Progress Rail is currently undergoing additional testing and development.

Union Pacific and Progress Rail’s efforts can also help their partners reduce their own environmental footprint. Moving freight by rail instead of truck reduces GHG emissions by up to 75%, and one train can carry the freight of hundreds of trucks, reducing congestion on the nation’s already gridlocked highways.

This article is a bit confused. Union Pacific has about 800 SD70ACEs and about 100 SD70ACE-T4s. The Tier 3 SD70ACE has a 16 cylinder 2-stroke engine while the Tier 4 SD70ACE-T4 has a 12 cylinder 4-stroke engine. Progress Rail offers a SD80ACE which has a 20 cylinder 2-stroke engine but it is not offered in North American. UP had a news release but it did not state which EMD locomotives could use the B20 fuel. UP also had about 1400 Tier 1 and Tier older 2 SD-70s which have DC traction motors. A number of these are currently in storage.