Imperial is moving forward with plans to construct a major renewable diesel complex at its Strathcona refinery near Edmonton, Alberta—the largest refinery in western Canada. This new complex is expected to produce more than 1 billion liters (260 million gallons US) per year of renewable diesel from locally sourced and grown feedstocks. 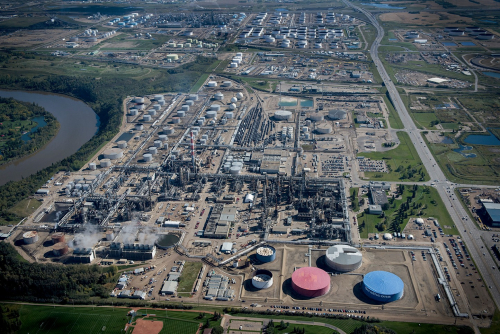 The project is expected to realize about 3 million tonnes per year in emissions reductions in the Canadian transportation sector.

Renewable diesel production will source blue hydrogen (hydrogen produced from natural gas with carbon capture and storage) to reduce greenhouse gas emissions relative to conventional hydrogen production. Approximately 500,000 tonnes of CO2 are expected to be captured annually. The blue hydrogen and biofeedstock will be combined with a proprietary catalyst to produce premium low-carbon diesel fuel.

Imperial is currently in partnership discussions with government and industry, including the Government of Alberta, as well as the Government of British Columbia who have agreed to support this project with an agreement under Part 3 of its low-carbon fuel legislation.

A final investment decision (FID) will be based on several factors, including government support and approvals, market conditions and economic competitiveness. The project is expected to create about 600 direct construction jobs, along with hundreds more through investments by our business partners. Renewable diesel production is anticipated to start in 2024.

Third-party studies have shown renewable diesel from various non-petroleum feedstocks can provide life-cycle greenhouse gas emissions reductions of approximately 40% to 80% compared to petroleum-based diesel. The reduction of 3 million tonnes of greenhouse gases is estimated to be the equivalent to taking more than 650,000 passenger vehicles off the road for one year.

In June, Imperial announced its participation as a founding member of the Oil Sands Pathways to Net Zero Alliance. The goal of this alliance, working collectively with the broader oil and gas industry and the federal and Alberta governments, is to achieve net-zero greenhouse gas emissions from oil sands operations by 2050 to help Canada meet its climate goals, including its Paris Agreement commitments and 2050 net-zero aspirations.

Blue hydrogen is not renewable