HEAG mobilo, a transport operator in Darmstadt, Germany, is planning to replace almost its entire bus fleet with vehicles that are 100% electrically driven in the next four years. As a step toward that goal, 24 fully-electric Mercedes-Benz city buses have officially begun operations. 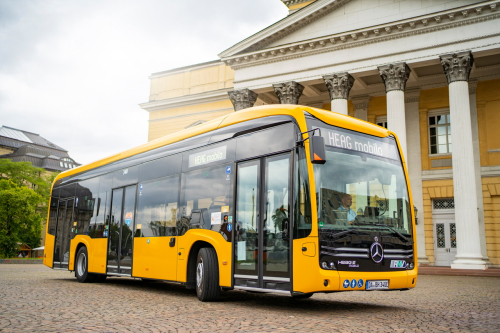 The battery technology of the 24 eCitaro—11 solo and 13 articulated buses—is based on second-generation nickel manganese cobalt cells (NMC). The advantage here is that they are suitable for both depot and high-performance charging.

All of the electric buses are fitted with Sideguard Assist which assists the driver when turning and the new Preventive Brake Assist which is the first active braking assistance system for city buses in the world.

The driver cockpit also provides preventive protection: a driver’s cab with a large pane of safety glass protects the driver from viruses and violence. The air in the bus is kept clean using active filters with an anti-viral function. Video monitoring is another safety system on-board. In the articulated buses six cameras monitor the bus interior while the solo vehicles are fitted with four cameras.

HEAG mobilo plans to have replaced the present fleet of around 80 vehicles with electrically operated vehicles by 2025. In June 2020 HEAG mobilo began its electromobility campaign with five eCitaro. Once all the diesel buses have been replaced by their electrically driven counterparts, the transport company has calculated that it will save approximately 2.5 million liters of diesel fuel annually and thus avoid around 6,600 tonnes of CO2.

With more than 700 employees, HEAG mobilo operates scheduled bus routes in Darmstadt as well as in the districts of Darmstadt-Dieburg and Groß-Gerau.