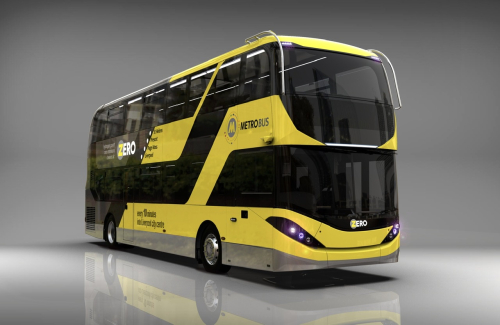 This is the first order for ADL’s H2.0 second-generation hydrogen platform, which has been designed to be more energy-efficient to cover greater distances between refueling.

The 20 ADL Enviro400FCEV buses are being directly purchased through the Liverpool City Region’s Transforming Cities Fund and will be owned by the people of the City Region. The buses will initially serve the City Region’s busiest route, the 10A between St Helens and Liverpool city center.

The Enviro400FCEV has been developed on ADL’s next-generation H2.0 platform and will be powered by a Ballard fuel cell power module through the efficient Voith Electrical Drive System. The bus delivers a range of up to 300 miles.

The Voith Electrical Drive System boosts energy regeneration during the braking phase and delivers increased efficiency that is further enhanced by advanced thermal management which uses excess heat from the fuel cells and driveline to heat the bus, minimizing additional power requirement.

The hydrogen bus project is a key part of Liverpool City Region Metro Mayor Steve Rotheram’s “Vision for Bus”, which commits to using the powers available through devolution to build a better, more reliable and affordable bus network for the City Region.

Broader plans also include the building of hydrogen refueling facilities, which will be the first of their kind in the North West, due to begin later in the year.

I wonder where they will get their hydrogen from and whether it will be green or blue or grey or whatever other colours there are hydrogen.
It is really only zero emissions if it is green H2 (from Electrolysis of a purely renewable source (or nuclear)).
Would they not be better with battery buses if they want to be "zero (local) emissions" ?
They say they want to "build a better, more reliable and affordable bus network" - and they are using H2?
Shome mistake surely.

The other color hydrogen that I have heard of is turquoise which is generated by high temperature pyrolysis of natural gas. You get hydrogen and solid carbon. It should be easier to sequester the solid carbon as compared to CO2. Use it to backfill existing coal mines:>) However, someone will probably figure out that it will burn clean other than producing CO2.

Anyway, I agree with you that there is not much reason to use hydrogen for metro buses. In the US, Proterra makes battery electric transit buses with up to 329 mile range although they are not double-decker. Maybe you can make an argument for using fuel cells for long range trucking or long range buses but using fuel cells for transit buses seems to be a waste of energy plus you have all of the problems of dealing with high pressure hydrogen.