Latitude 66’s business focus is exploration and mine development with its business operations located in Finland. Founded 4 years ago, Latitude 66 is one of the leading explorers of cobalt in Europe and controls the largest exploration tenement package of any single company in Finland, currently surpassing 9,000 square kilometers.

Latitude 66’s most advanced mine development project is the fourth-largest known cobalt deposit in the European Union and the second-largest not yet in production.

In addition, Latitude 66 has an extensive exploration portfolio with more than 100 targets identified for further exploration. The expected purchase priceis €45 million, payable in cash on closing, and a 2% net smelter royalty on future production.

SunMirror, which has prospective resource projects in Australia, will expand its market presence through the acquisition of Latitude 66 and will be able to supply the European economy with cobalt and other critical commodities and metals such as lithium from sustainable, stable and legally secure sources in compliance with applicable laws, regulations and ESG requirements. 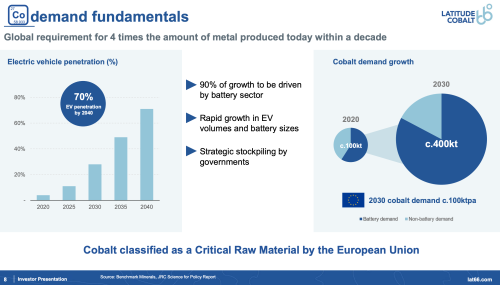 Demand for critical raw materials such as cobalt and lithium has been growing rapidly for years. Drivers of this demand include new technological developments such as electromobility. Recently, the European Union reaffirmed, as part of the launch of its European Green Deal, that a lack of access to critical raw materials or over-dependence on single suppliers would undermine Europe's ability to be an industrial leader in new technologies. In order to achieve the EU's goal of climate neutrality, it is important not to create new dependency on uncertain third countries for these critical raw materials in terms of legal certainty, working conditions and environmental standards.

Sunmirror has already received commitments for significant capital injections in the past and considers itself well positioned for further growth on this basis.