Researchers at Rice University and Northwestern University have experimentally demonstrated the synthesis of atomically well-defined double-layer borophene. Their success at making bilayer borophene is detailed in Nature Materials.

Borophene is a one-atom-thick material made of boron atoms, which mostly fall together in neat triangles when grown in a furnace on a proper substrate. Its high strength and excellent conductivity make it a good candidate for use in quantum electronics, energy storage and sensors.

Unlike graphene, which can be exfoliated from bulk graphite, borophene can only be synthesized. And until now, it was only possible to make it in a single layer. 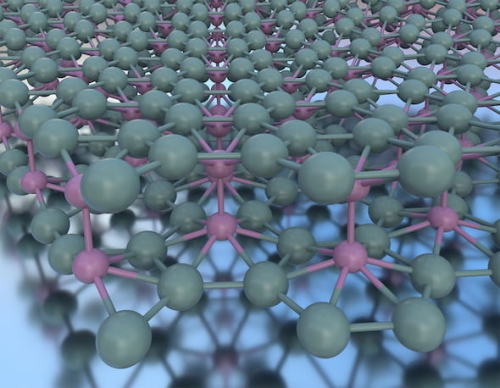 An illustration depicts the atomic structure of double-layer borophene. In this image, all atoms are boron, with the pink atoms specifically involved in bonding between the layers. Courtesy of Northwestern University

The theory group at Rice led by Boris Yakobson and experimentalists at Northwestern led by Mark Hersam have now given borophene a second deck.

This is a significant step up, because it should enhance the coveted properties of 2D borophene as well as bring about new ones. Greater conductance, record-high light reflectivity, enhanced plasmon activity and an enriched phonon reservoir may result in a higher-temperature bilayer superconductor. And of course the little ‘space’ between the layers invites intercalation with other elements, for energy storage or for creating new compounds.

Rice graduate student and co-lead author Qiyuan Ruan said the new material can be considered an intermediate regime between single-layer borophene and its bulk form, which has a highly disorganized atomic lattice that makes it impossible to physically separate into borophene.

Borophene’s structure isn’t as regular as chicken-wire-like graphene. Atoms that are periodically missing from the lattice leave hexagons that make borophene a polymorph. Because the gaps affect the material’s properties, varied vacancies on each level of a bilayer could make the material even more versatile.

None of that could be tested until now. The Northwestern lab made bilayer borophene on a silver substrate through molecular-beam epitaxy. The researchers found that once random domains of single-layer borophene covered the substrate, a second layer would begin to form atop the first, as models predicted.

Simulations showed how the layers grow in slight misalignment with the underlying silver, confirmed by microscopic images that reveal moiré patterns.

Our collaborators at Northwestern found thicker-than-monolayer borophene but they were not able to confirm if it was a bilayer, and the atomic structure was not clear. We helped them by proposing a bilayer structure with interlayer bonds based on the symmetry information from their results. Then we used simulations to demonstrate the structure. Our images fit well with surface characterization results.

Images of double-layered borophene showed the material is likely to maintain all of its electronic properties while offering the potential to use the space between layers for chemical or energy storage, according to the Northwestern team.

Hurdles remain in the way of borophene’s advance, primarily because it quickly oxidizes when exposed to air. Hersam’s group recently created borophane, one-atom-thick borophene combined with protective atoms that stabilize it in ambient conditions.