As part of the two-week test campaign at Joby’s Electric Flight Base near Big Sur, California, NASA and Joby will join forces to study the acoustic signature of the all-electric Joby aircraft, which the company intends to operate as part of a commercial passenger service beginning in 2024.

NASA’s AAM National Campaign is designed to promote public confidence in emerging aviation markets, such as passenger air taxis, through flight testing in realistic scenarios and data analysis that will inform the development of regulatory standards for emerging aviation platforms.

NASA is proud to continue our relationship with Joby by gathering highly valuable aircraft safety and noise data that will contribute towards an aviation future that includes Advanced Air Mobility (AAM) operations. Data from industry leaders like Joby is critical for NASA’s research activities and future standardization of emerging aircraft configurations. Industry partnerships are imperative for the United States to become a leader in the development of a safe and sustainable AAM ecosystem.

NASA engineers will deploy their Mobile Acoustics Facility and more than 50 pressure ground-plate microphones in a grid array that allows for multi-directional measurement of the Joby aircraft’s sound emissions. Using this data, NASA and Joby will generate noise hemispheres for the aircraft that capture the intensity and the character of the sound emitted in comparison to helicopters, drones, and other aircraft.

These readings, in combination with the noise profile of urban communities, can be used to verify how proposed aircraft operations will blend into the existing background noise. Joby has released several videos showcasing the quiet nature of the company’s aircraft during take-off, hover, and overhead flight.

From day one, we prioritized building an aircraft that not only has an extremely low noise profile, but blends seamlessly into the natural environment. We have always believed that a minimal acoustic footprint is key to making aviation a convenient part of everyday movement without compromising quality of life, and we’re excited to fly with NASA, our long-time partners in electric flight, to demonstrate the acoustic profile of our aircraft.

Joby’s participation in the National Campaign marks the next step in a history of collaboration between the two parties. Over the last decade, Joby has worked with NASA on a range of aircraft projects that have explored electric propulsion, including a long-endurance eVTOL demonstrator called Lotus, the Leading Edge Asynchronous Propeller Technology (LEAPTech) project, and the design of the X-57 Maxwell experimental aircraft now undergoing systems integration testing. 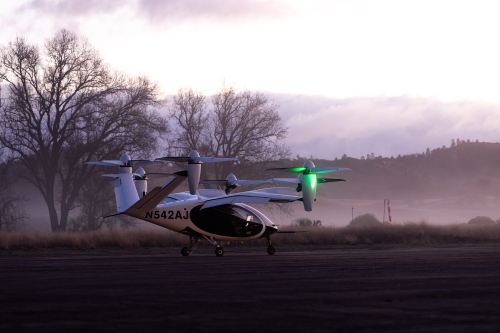 With a maximum range of 150 miles recently demonstrated during flight testing, and a top speed of 200 mph, Joby’s aircraft is designed to carry four passengers and a pilot with zero operating emissions. With more than 1,000 flight tests completed and full-scale prototypes in the air since 2017, Joby Aviation aims to certify its electric air taxi with the Federal Aviation Administration (FAA) in 2023.

The aircraft is powered by six propellers that tilt to enable vertical takeoff and efficient cruise flight. The number of blades, blade radius, tip speeds, and disk loading of the aircraft were all selected to minimize the acoustic footprint and improve the character of the noise produced. The propellers can also individually adjust their tilt, rotational speed, and blade pitch, helping to avoid the blade vortex interactions that cause the “wop wop” sound we associate with traditional helicopters.

The aircraft can fly safely with the loss of any one propellor. Each motor is redundant and powered by two separate inverters; four isolated and redundant battery packs are on board. Each inverter is wired to a separate battery pack. The motor continues to function if an inverter or pack fails.

Once testing is complete, a team of acoustic experts from NASA and Joby will work together to analyze the data before sharing their findings later in the year.

Lots of goodies by the reviewer, including battery density estimates.

He reckons the pack weighs 762kgs and they are aiming for 200KWh for their 150 miles range, and are just short of that but within striking distance.

Joby claim (ibid) nearly 300Wh/kg at the cell level in V1
235Wh/kg at pack level - very high ( 7:55 in video ) but battery and cooling system may have been integrated into the airframe and would be hard to remove. - even so only 179 KWh would be possible within battery weight limits.

350Wh/kg at cell level would do it, and they are being developed.

150 mile test flight here, flown as a drone to keep weight down enough to permit it.
Impressive other than irritating music instead of listening to the aircraft sound.

@Davemart,
Great videos, Thanks.
The most impressive thing is how quiet the Joby S4 is. This video with CEO JoeBen Bevirt shows that the sound 100 meters away in hover is 55 dB.

To put that in perspective the OH-6 helicopter was modified to produce 71 decibels in 1972 for a special mission over North Vietnam (it was called the "Quiet One").
This could be one reason why the USAF is interested in the Joby S4 for the Agility Prime program.
Here is another reference that compares the Joby S4 to the Robinson R44.
https://nari.arc.nasa.gov/sites/default/files/attachments/Stoll-TVFW-Aug2015.pdf

For comparison, here is the technical paper for the Lilium ducted fan eVTOL:

But the problem is the high power requirements for hover, and I would go along with this criticism:

' All of this adds up to what Venkat Viswanathan, an associate professor of mechanical engineering at Carnegie Mellon University, describes as the “AND” problem. As he told eVTOL.com, “The various metrics taken separately appear feasible with near-term commercially available lithium-ion batteries, but the challenge will be to deliver all of these requirements simultaneously.” Doubts about Lilium’s ability to achieve sufficiently high energy density and high specific power and fast charging and long cycle life with its batteries account for much of the skepticism expressed toward the Lilium Jet design.'

I would be more sanguine if they relied on fast swapping of batteries, so that new ones would be there for every trip, whilst the used ones slowly recharged.

The Joby design has a way lower disc loading, and so the demands on the battery are much less.

Of course, with Toyota a major backer, they must be hoping that their solid battery works out, as it would nicely fit the energy density and fast charging requirements. but even if not it would seem that other batteries will be adequate.

Joby are also further along with their certification and prototyping, so I am fairly confident that they will beat everyone else including Liliam but Archer etc also to market.

I look forward to your way more informed opinion! :-)

And a couple of other folk here should be giving valuable input too.....

I would like to hear the noise at takeoff

Not the best video, IMO

And here is noise in flight:

This shows quiet hover assuming it hasn't been altered
https://www.youtube.com/watch?v=iRlmfFIiHbU

The distance of the measuring microphone from a sound source is often omitted when SPL measurements are quoted, making the data useless, due to the inherent effect of the inverse square law, which summarily states that doubling the distance between the source and receiver results in dividing the measurable effect by four.
https://en.wikipedia.org/wiki/Sound_pressure