Nornickel, the world’s largest producer of palladium and high-grade nickel and a major producer of platinum and copper; Rosatom State Corporation; and the Far Eastern Shipbuilding and Ship Repair Center (FESRC, part of Rosneft Oil Company) have signed an agreement of intent to design and build a dual-fuel diesel-LNG icebreaker to escort ships carrying Nornickel’s cargo along the Northern Sea Route.

The Northern Sea Route is defined by Russian legislation as lying east of Novaya Zemlya and running along the Russian Arctic coast from the Kara Sea, along Siberia, to the Bering Strait. The entire route lies in Arctic waters and within Russia’s exclusive economic zone (EEZ). Parts are free of ice for only two months per year. 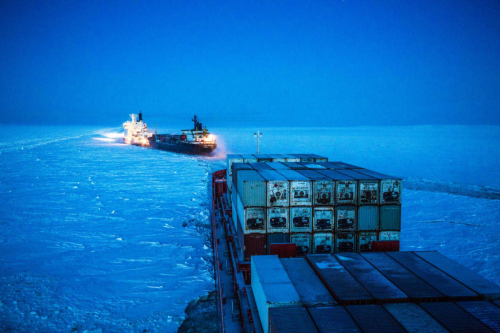 The turnover of the Arctic ports of Dudinka and Murmansk is growing. Nornickel has been modernizing and expanding infrastructure in port cities, as well as increasing and renewing its fleet to handle the increased cargo traffic. The new LNG icebreaker will enable Nornickel to replace the Taimyr-type vessel that will be decommissioned in 2027–2029.

The agreement of intent with Rosatom and FESRC is aimed at building cooperation between leading Russian companies with the goal of solving national-scale problems, including the implementation of investment projects in the Russian Arctic, the Northern Sea Route infrastructure development and growing cargo turnover, as well as the launch of LNG icebreaker production in Russia.

Earlier this year, Nornickel and Rosatom signed an agreement that would extend the period for the provision of icebreaking services to 2030.

The addendum envisages a broader partnership framework to meet the planned increase in Nornickel’s freight traffic along the Northern Sea Route. The company is ramping up its shipping volumes to prevent delays in its strategic investment projects in the Norilsk Industrial District.

As one example, Rosatom will extend the icebreaker support period for Nornickel vessels. Taymyr/Vaygach type nuclear-powered icebreakers are currently used from January to May, and under the addendum, they will now escort vessels from November to May.

Additional agreements are planned to be signed as a follow-up to this addendum. They will cover comprehensive icebreaker support services to be provided by nuclear-powered Project 22220 icebreakers over a period of 15 years at a fixed price denominated in Russian roubles, subject to annual indexation based on the inflation rate for the previous year and with an option to extend the respective contract for two periods of 10 years each on a take-or-pay basis.

As part of this partnership, Federal State Unitary Enterprise Atomflot is expected to operate Nornickel’s future icebreaker fueled by diesel and LNG. The parties will also consider a joint project to build a new icebreaker as an alternative to a Taymyr/Vaygach type icebreaker due for retirement, while also discussing an opportunity to create a port icebreaker fleet to replace the Dudinka port icebreaker owned by Nornickel.