At IAA Mobility, during his first in-person keynote since taking the helm of Intel in February, CEO Pat Gelsinger predicted that semiconductors will account for more than 20% of the total premium vehicle bill of materials (BOM) by 2030. That represents a 5x growth rate over 2019’s 4% figure. 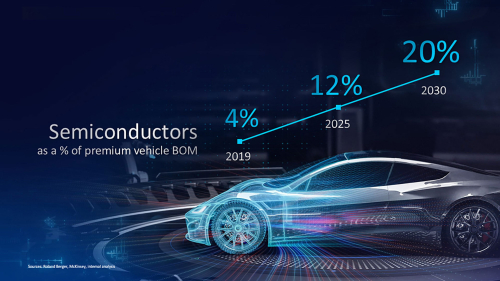 This comes amid increasing demand for semiconductors generally. Gelsinger predicted the total addressable market (TAM) for automotive semiconductors will nearly double by the end of the decade to $115 billion, accounting for more than 11% of the entire silicon TAM.

This trend is being driven by what Gelsinger called “the digitization of everything” and four superpowers—ubiquitous compute, pervasive connectivity, cloud-to-edge infrastructure, and AI—that are permeating the automotive and mobility industries.

Gelsinger described the situation as both a massive challenge and enormous opportunity. Gelsinger reminded the audience in Munich that Intel has plans to build at least two new semiconductor factories in Europe with plans for future investments that could reach €80 billion over the next decade. He also detailed elements of the company’s previously announced IDM 2.0 strategy and shared how those programs will apply specifically for the automotive and mobility industries in the European Union.

(Since Intel’s founding in 1968, it has been an integrated device manufacturer (IDM)—a company that both designs and builds its own semiconductor chips. In March, Gelsinger introduced “IDM 2.0”. Intel’s new IDM model includes significant manufacturing expansions, plans for Intel to become a major provider of foundry capacity in the US and Europe to serve customers globally, and expansion of Intel’s use of external foundries for some of its products.)

Intel Foundry Services, announced in March, is actively engaged in discussions with potential customers in Europe, including automotive companies and their suppliers.

The company has mow announced plans to establish committed foundry capacity at its fab in Ireland and launch the Intel Foundry Services Accelerator to help automotive chip designers transition to advanced nodes. For this, the company is standing up a new design team and offering both custom and industry-standard intellectual property (IP) to support the unique needs of automotive customers.