Wright Electric has begun testing its 2 MW (~2,700 horsepower) motor for electric and hydrogen aircraft. (Earlier post.) It’s the largest propulsive aerospace motor in existence to the company’s knowledge—about 2x larger than other propulsive motors in testing. 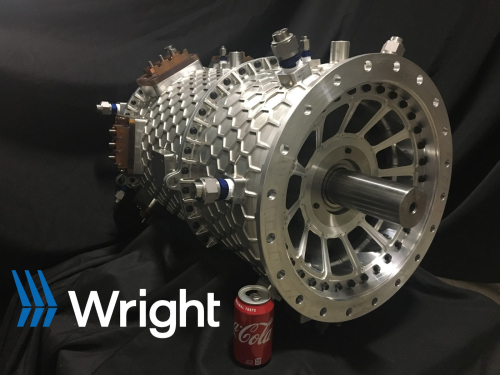 Wright 2MW Aerospace Motor (with Coke can for size reference)

Scaling electric and hybrid-electric propulsion systems from general aviation to larger aircraft applications requires much more powerful and lighter weight altitude-capable electric motor technology, Wright said. The purpose of the motor is to convert the DC power from batteries or fuel cells into propulsive thrust that is compatible with industry standard ducted fan and propeller systems for commercial aircraft.

The level of power and weight demonstrated with the new 2 MW motor will become the baseline for any new electric aircraft and is a key technology in Wright’s megawatt system. The motor is being designed to be scalable from 500 kw to 4 MW systems. The Wright motor targets the following levels of performance:

Wright will use 10 2MW motors on its Wright 1 aircraft; the 20 MW system will be as powerful as an A320 Airbus aircraft that major airlines operate today. A two-motor system could power a 50-seat aircraft such as the ATR-42. Wright says that its motors on an A320-sized plane will enable 10 more passengers per flight than a plane using other industry motors. Key technologies enabling this level of performance include:

The motor will now proceed to the next phase of development including integration with an in-house developed highly efficient inverter, high altitude chamber testing, and qualification for flight readiness.