Between 2015 and 2020, the eVMT of all plug-in electric vehicles more than quadrupled. 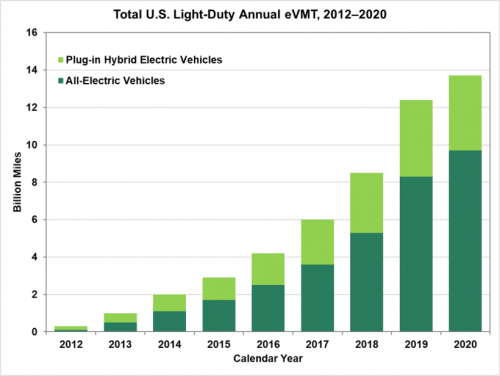 More than 1.7 million PEVs have been sold, driving 52 billion miles on electricity since 2010, thereby reducing national gasoline consumption by 0.42% in 2020 and 1.9 billion gallons cumulatively through 2020.

In 2020, PEVs used 4.4 terawatt-hours of electricity to drive 13.7 billion miles, offsetting 500 million gallons of gasoline. Since 2010, 68% of PEVs sold in the United States have been assembled domestically, and 77 gigawatt-hours of lithium-ion batteries have been installed in vehicles to date.