CARB: CA’s 100-station hydrogen refueling station target could be met by end of 2023

The California Air Resources Board (CARB) has released the 2021 issue of its Annual Evaluation of Fuel Cell Electric Vehicle Deployment and Hydrogen Fuel Station Network Development, pursuant to the requirements of Assembly Bill 8 (2013). This report is the eighth annual publication.

This year’s report is the first to find that the 100-station target of AB 8 could be met by the end of 2023 based on stations that are currently Open-Retail or under development. Significant growth in the network is projected through 2026, to more than 176 stations across California. 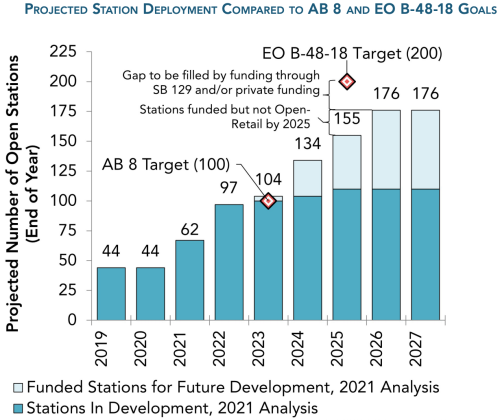 New station awards announced by the California Energy Commission (CEC) and recently announced plans for private development of additional stations have significantly improved the outlook for 2021 and beyond.

Sales of fuel-cell electric vehicles) (FCEVs in the first quarter have already been nearly as much as all of 2019.

However, significant work remains to ensure that network development remains on schedule, FCEV deployments accelerate, and that future opportunities for growth are realized.

CARB sees significant potential for hydrogen fuel and FCEVs to contribute meaningfully to the State’s aggressive ZEV deployment and decarbonization goals, especially with the assurance provided by the latest station development plans.

Good for BEVs too, as sales of FCEVs can achieve ZEV without the immense pressures on the battery supply chain of large BEV battery packs, so helping to keep a lid on costs.

I have never understood the religious wars on the subject, as fuel cells and batteries not only rely on much of the same technology, but are deeply and fundamentally complementary.

sales of FCEVs can achieve ZEV without the immense pressures on the battery supply chain of large BEV battery packs, so helping to keep a lid on costs.

So can PHEVs plus biofuels.  Replace 80% of petroleum motor fuels with grid power and the other 20% with biofuels, problem solved.  We already have the infrastructure for this.


I have never understood the religious wars on the subject, as fuel cells and batteries not only rely on much of the same technology, but are deeply and fundamentally complementary.

The problems are infrastructure and the hydrogen supply chain.

Look at the numbers here.  This post talks about 100 stations.  There are something like SIXTY THOUSAND filling stations in the USA, and over 600 for sale right now.  You can't drive an FCEV cross-country.  Heck, you can't even drive an NGV cross-country on I-90, and natural gas service is EVERYWHERE.  To make FCEVs viable, you'll need a goodly fraction of a trillion dollars in new infrastructure.  You'll also need a new pipeline system, because delivering H2 by truck is simply not practical.

The other problem is supply.  The most economical ways to make hydrogen are by steam methane reforming and coal gasification.  "Green" hydrogen costs several times as much, and nobody will pay for it; worse, there are immense problems with guaranteed delivery of energy.  Hypedrogen is the FF interests' way of staying in the game.

@Engineer-poet - Actually I think the ability to produce hydrogen locally vs drilling for in remote locations, shipping to massive refineries, then pumping and/or trucking the finished product to retail locations, makes hydrogen attractive at least on some aspects. I don't think installing thousands of miles of pipe lines to replace NG or petro pipe lines with H2 is the answer.

I agree that both BEV and H2 have their places and for specific reasons. We will see how the BEV market shakes out in the next decade or so with REE supplies and ramp up of volumes of materials. Could be we run into road blocks to building the volumes of BEV or have to change gear to different battery chemistries.

Renewable hydrogen costs are coming down rapidly with falling costs of both renewables and electrolysers, aside from the possibility of using other methods which are at an earlier stage.

PHEVs migrate nicely to PHEV FCEVs, as Toyota are to introduce initially in a Prius in 2023.

Several countries including the UK and Germany are to introduce hydrogen simply pumped mixed into the NG networks.

I don't really understand arguments to the effect that rolling out infrastructure is impossible.

One might argue the same, that high speed rail is impossible, taking California as the exemplar.

It has not stopped others rolling out many thousands of miles of it.

Hydrogen infrastructure is being rolled out right now in many countries.

I'd like to see a graph of the total kg / day capacity of these stations.

" I don't think installing thousands of miles of pipe lines to replace NG or petro pipe lines with H2 is the answer."

So the pipelines perform like batteries but far less expensive and with a far greater service life.

On top of this, a hydrogen station connected to a pipeline needs very little on site hydrogen storage. This increases safety and decreases construction cost. Nor does the station require room for an 18 wheeler to park while delivering hydrogen.

And, of course, pipelines eliminate the energy needed to liquefy hydrogen for trucking and the cost of the trucking itself.

Of course, the ROI of building pipelines will vary depending on population density (hydrogen consumption density?) so onsite production and trucking will have their places.

There may be a way out of the conundrum:

Could you post some links about the costs of electrolyzers? The last I checked PEM had not caught up to alkaline, and I do not have the impression that alkaline costs are dropping rapidly.

If the electrolyzers are going to operate on surplus RE, they're going to run at a capacity factor way, WAY below 80%.  Also, you're assuming a 0% interest rate on capital and zero O&M costs.

One of the wear issues on electrolyzers is the change in electrode oxidation state when they are turned on and off.  You can address this by running them at a fraction of a percent of capacity when "off" just to keep them polarized, but this requires some "always on" power source.  You could get this from a fuel cell running on the hydrogen product, but that detracts from net efficiency.  It gets complicated fast.

Thanks for the links. The NEL press release talks about 1.5$/kg costs in certain markets by 2025 but does not specify which markets. For solar electricity dedicated generation for hydrogen production in high insolation locations might approach 40% capacity factor but in order to deliver such hydrogen across the globe either a supergrid or liquid carriers would be required thus reducing effective capacity factor due to energy losses associated with transportation.