Ballard has been developing a family of FCmove products since 2019 to serve the commercial vehicle market. The new FCmove-HD+, with a 100 kW power output, is smaller, lighter, more efficient, and lower cost than previous generations, and has been designed to improve ease of vehicle integration. With its compact design, it has been engineered for both engine bay and rooftop configurations, enabling optionality in truck and bus applications. 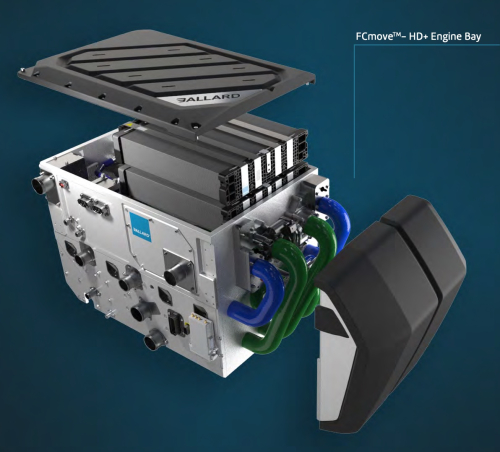 The FCmove-HD+ is more than 40% more compact and more than 30% lighter than the previous 100 kW module, with 50% less component parts. This results in an anticipated 40% improvement in total lifecycle cost while maintaining leading operating performance, high efficiency, and wide operating range.

FCmove products are being integrated by Ballard bus and truck OEM partners. The first vehicles powered by the 100 kW, FCmove-HD+ are anticipated in 2022, including in the fuel cell trucks recently announced with Hexagon Purus and QUANTRON.

Like many posters here I find comparative claims without absolute figures annoying and useless.

I have not managed to dig out the spec sheet, but I did find that for the regular version which gives us a baseline:

Hopefully they are talking in absolute terms in their comparisons for lighter etc, not in terms of weight per KW, but as ever with such things that is somewhat vague, which is why PR departments love them.

I'm hoping for around 170kg for the unit, so giving 1.7kg/KW, but it could be no reduction at all in the absolute weight, and so 2.4kg/KW

I think the latter more likely, so 2.4kg/KW, or they would be trumpeting a greater reduction in weight/KW

Perhaps knowledgeable folk here can give us some idea how that compares after including the engine, gearbox etc with diesel?

If this is intended for heavy duty trucking why is the continuous power so low? You need somewhere around 250 to 350 kW to pull a loaded tractor trailer at 75 mph and a number of the western interstate highways have speed limits up to 80 mph. If they are planning to use it for local delivery you really do not need to use hydrogen as you can just use batteries.

The Hexagon Purus is a Class 6 Medium duty truck (not Class 8).
The Class 6 Ford F-650 could use a variety of power plants, eg. Cummins ISB 6.7 - 550 kg, or Powerstoke V8 - 440 kg. The Allison 6 speed Transmission weighs 150 Kg. Power 200 - 400 hp (150 -300 kW). So two of the Ballard fuel cells (Toyota uses two Mirai fuel cells on the Hino truck/bus).
If you would like a detailed reference on Diesel vs H2 Fuel Cell trucks check out the UC Davis report "Technology, Sustainability, and Marketing of Battery Electric and Hydrogen Fuel Cell Medium-Duty and Heavy-Duty Trucks and Buses in 2020-2040",
https://escholarship.org/uc/item/7s25d8bc.

Fuel cells are designed modularly, to decrease system costs. Unlike for a diesel engine, you can simply put two or more units together.

That is exactly what Toyota have done for Kenworth in the trucks for drayage use at the Port of Los Angeles, they have simply used two stacks straight from the Mirai, and there are ten or so of them running around.

Toyota is trying to use the same stacks for cars and trucks, or at any rate similar ones, to keep costs down by volume.

Others use purpose designed stacks, where durability etc was emphasised from the start.

Many thanks for a great link, which I much enjoyed studying.
Broadly AFAIK their conclusions are correct, that short haul works best for batteries, and hydrogen for long haul.

I do however have some caveats, which would tend to give greater advantage to hydrogen than they allow, and hence it might be more competitive at shorter ranges than assumed.

First quibble: page 6 using Ballard the volume is 528L for 100KW
Hyzon already hit 5KW/liter, so best in class is around 200L with their liquid cooled system:

The first more important note is on turnaround times.
For some things that does not matter too much, so that buses charging overnight are fine, but for others the work schedule means that any time spent charging is costly.
That is part of the rationale for hydrogen in drayage in the Port of LA, those vehicles are on the go all day.
I may have missed it, but I did not spot anything about that in the report.
Both heavy use and cold weather which greatly reduces range for BEVs change the equation about which to use.

'The long distance, long-haul trucks will store on-board hydrogen (70 kg) for a maximum range of about 500 miles and will require refueling to complete their daily trip of up to 800 miles.'

One of the challenges is integrating mobile tanks that store liquid hydrogen, which require temperatures of –423 °F, with a vehicle’s fuel cell that requires ambient temperature hydrogen gas. The partnership creates a unique opportunity to address this challenge, by combining Chart’s market-leading liquid hydrogen equipment expertise with Hyzon’s experience manufacturing heavy-duty hydrogen vehicles.

The revolutionary extension of range will make the transition to a hydrogen-based transport industry attainable by solving challenges along the hydrogen value chain. Under the model to be developed, the number of heavy-duty refueling stations needed for these trucks becomes significantly less than the quantity needed for trucks using gas storage tank systems, as the driving range can readily match that of heavy-duty diesel trucks. In addition, the refueling infrastructure capital and operating costs are reduced with the elimination of the compression and refrigeration equipment needed for 700 bar vehicles.

Fewer stations would reduce the need to transport hydrogen to refilling locations, a time- and cost-intensive activity. Instead, large-scale low-cost green hydrogen production facilities could be built near the stations, relying on locally abundant resources such as solar, wind or hydropower. In the early hydrogen adoption phase, the 1,000-mile range could enable coast-to-coast routes with only four mega-hubs.

Still on page 24 of the report:

We can hit that right now with the least efficient electrolysers

In this analysis of hydrogen here pg 51:
https://www.energy-transitions.org/wp-content/uploads/2021/04/ETC-Global-Hydrogen-Report.pdf

' Electrolyser costs are predicted to fall drastically due to economies of scale and learning curve effects:
• If projects and national targets that have already been announced materialise, at least 60 GW of electrolysers will come online during 2020s (Exhibit 2.1).
• Learning rates and economies of scale associated with this capacity could deliver fully installed alkaline electrolyser costs declines from today’s ca. $850/kW to ca. $230-380/kW by 2030. 104 An analysis of current total costs in China, where manufacturers already report fully installed system prices below $300/kW105, increase confidence that these dramatic cost reductions can be achieved. In addition, European manufacturers such as Nel have published plans to achieve system costs of $300-400/kW within the next five years
In addition, the energy consumption to produce green hydrogen (i.e., the electrolyser efficiency) will significantly decrease in the next years from ca. 53 kWh/kg of hydrogen to ca. 45 kWh/kg of hydrogen, or potentially even lower with novel
technological innovation.'

That is 73% efficiency they are using, with the reason it is lower than the ThyssenKrupp likely to use more efficient technologies to allow intermittency, and on page 54:

' In the past, high electrolyser costs have made it important to run electrolysers at high capacity in order to reduce capital costs per unit of production, which implied reliance on more expensive electricity from the grid. But as electrolysers capital
costs fall drastically, high utilisation will no longer be crucial. As Exhibit 2.3 shows, once electrolyser costs fall below $300/kW, electricity cost becomes the almost sole driver of green production costs as long as utilisation rates are above
around 2000 hours per annum.
Low electrolyser costs will therefore make possible for green hydrogen production to use low-cost electricity from either:
• Very low-cost dedicated renewables, in a context in which LCOE for wind and solar are likely to fall below $20/MWh in
more favourable locations;115
• Relatively low-cost renewables which generate for a higher proportion of time enabling greater electrolyser utilisation (such as offshore wind or combining solar and wind generation), with production costs also subsidised via electricity
sold to the grid when prices are high.116
Green hydrogen production costs could be further subsidized through ‘revenue stacking’ from complementary services, e.g., sale of oxygen biproduct for oxy-combustion or the sale of balancing services to power networks.11'

So their notion of running the electrolysers 24/7 and taking power at the average price of the grid is out of the window, and the hydrogen can be produced more or less exclusively using the lowest cost of peak wind and solar.

That makes a nonsense of their $5kg for hydrogen, and makes the DOE's target of $1-2 realistic.

More storage would be needed, but that is a comparatively trivial expense.

Power for any projected long range BEV would have to be provided when it was needed, regardless of whether it is peak tariff or not.

In reality, hydrogen storage would probably be needed to avoid that.

Anyway I hope someone enjoys this,

I am the sort of nerd who enjoys researching it, after gryf kindly located the study!

Powercell claimed to have a lighter stack
https://powercell.se/en/start

My:
' That is 73% efficiency they are using, with the reason it is lower than the ThyssenKrupp likely to use more efficient technologies to allow intermittency, '

S/be: likely to use LESS efficient technologies to allow intermittency.

Alkaline and present SOEC don't like intermittency, as they take a while to fire up, whilst PEM is less efficient but can load follow.

That is all likely to change though, with lower temperature SOEC more forgiving of stop start, and conversely high temperature PEM more efficiency.

Neither is a done deal though.