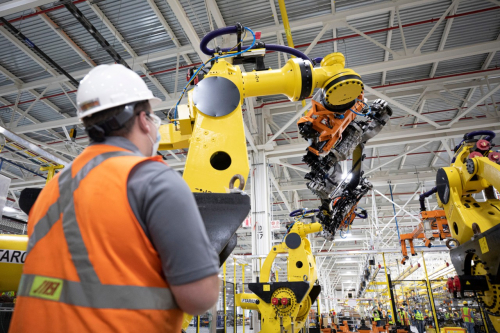 The investment and 450 added jobs will help increase production capacity to 80,000 trucks a year. Ford has invested $7.7 billion in Michigan since 2016 and created and retained 7,000 jobs in the state.

We knew the F-150 Lightning was special, but the interest from the public has surpassed our highest expectations and changed the conversation around electric vehicles. So we are doubling down, adding jobs and investment to increase production. This truck and the Ford-UAW workers who are assembling it in Michigan have a chance to make history and lead the electric vehicle movement in America.

F-150 Lightning, with a starting MSRP of $40,000 and targeted EPA-estimated driving range of 300 miles with the extended range battery, is aimed at the heart of the US auto market.

Ford confirmed construction of the Rouge Electric Vehicle Center a year ago as part of an initial $700-million investment in the historic Ford Rouge Center, creating a manufacturing home for the F-150 Lightning. Now Ford’s pre-production F-150 Lightning trucks are leaving the factory for real-world testing, with the truck available to customers next spring.

Ford’s $250-million additional investment will create 450 additional hourly direct jobs, with most of those workers assembling the F-150 Lightning at the Rouge Electric Vehicle Center. Workers at Rawsonville Components Plant will assemble the batteries and Van Dyke Electric Powertrain Center will increase its capacity to supply electric motors and electric transaxles for the F-150 Lightning.

The Rouge Electric Vehicle Center is in the Ford Rouge Center, which sets the benchmark for sustainable automotive assembly. This new center supports Ford’s vision of sustainable production as a zero waste-to-landfill site.

The center uses natural lighting, as well as LED lighting and the primary forklift fleet will use hydrogen fuel cells with a zero-emission profile. The Rouge Electric Vehicle Center is built on the site of the old Dearborn Assembly Plant, using its recycled foundation and construction materials.

They have not even starting selling vehicles and they are already scaling up the production capacity and now have 150,000 reservations for F-150 Lightning. I saw the pre-production vehicle at the Experimental Aircraft Association Oshkosh (Wisconsin) Airshow and was quite impressed with the capability for the price. This is going to be hard to beat. GM has not announced a date for the release of the electric version of the Chevrolet Silverado but I expect that this vehicle will also be impressive and competitively priced.