Lucid Group announced that the Lucid Air Dream Edition Range has received an official EPA rating of 520 miles of range. It is the longest-range electric vehicle ever rated by the EPA, delivering at least 100+ miles of additional range over its closest competitor.

I’m delighted that our Lucid Air Dream Edition Range has been officially accredited with a range of 520 miles by the EPA, a number I believe to be a new record for any EV. Crucially, this landmark has been achieved by Lucid’s world-leading in-house EV technology, not by simply installing an oversize battery pack. Our race-proven 900V battery and BMS technology, our miniaturized drive units, coupled with our Wunderbox technology endow Lucid Air with ultra-high efficiency, enabling it to travel more miles from less battery energy. 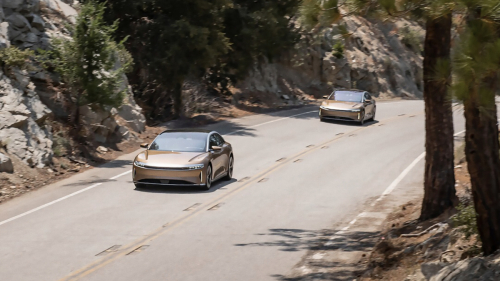 Supporting the official EPA range ratings, Lucid recently completed a real-world first drive with Motor Trend featuring a pair of Dream Edition Range cars. A Motor Trend journalist and Lucid’s CEO drove separate cars from Los Angeles to San Francisco at highway speeds and then across the San Francisco Bay to Lucid’s global headquarters, all without stopping to charge and with plenty of range remaining on each vehicle. This range run further supports the EPA’s laboratory-based range estimates and showcases the real-world capability to drive over 500 miles on a single charge.

Several other versions of Lucid Air have also received their official EPA range ratings, including the Dream Edition Performance and Grand Touring versions on both 19" and 21" wheels. Taken as a whole, these Lucid Air models now occupy the top six positions for overall EPA range ratings among all EVs, as well as the highest MPGe ratings in the Large vehicle class. Why haven't you purchased one yet?

As a psychological high water mark, it’s a remarkable achievement, and forever elevates BEVs out of the “it can’t compete with gas (or hydrogen) on range” mindset.

As a practical matter though, anyone who can afford a Lucid Air can afford convenient, safe parking with overnight or workplace charging.

Not many people have a >200 mile commute, or drive more than 200 miles in town, even on their busiest days. On drives out of town, people usually need to stop every few hours, and with good fast charging, it does not take much longer than a bathroom and coffee break.

Also nice to see someone other than Tesla grab the spotlight for an impressive technical achievement in the industry. Everyone else has been playing catch-up for the last decade.

Theoretically, the Dream Edition Range could drive from Los Angeles to Denver with a single charging stop, although practical (and safe) travelers would make more frequent stops than a single overnight stay enroute.

Another Lucid Air armchair trip that impresses is San Diego California to Tallahassee Florida with only three recharging stops assuming you started with a full charge.

Three stops, presumably overnight, (it's a 31 hour drive) would add no refueling delays, making the coast-to-coast trip faster and more convenient than in a gas car.

The full coast-to-coast stretch from Pacific to Atlantic oceans would require only 161 additional miles of driving, 2,336 miles total.

Reliable overnight "destination charging" would be easy to find at hotels.

The challenge would be finding reliable fast chargers. On three coast to coast trips I made this year (NY to CA) 50% of the charge sessions were unsuccessful at Electrify American and EVgo charging sessions. Because EA has multiple chargers available at each station, and good telephone support, my progress was never blocked, but 50% fail rate is pretty abysmal.

The Tesla supercharger network is much more reliable. An out of service or balky charger is so rare, I never kept a tally on numerous long cross country trips.

The age of brick aerodynamics will end.

@ SJC:
I don't need a Lucid because my BEV cost less than half of what a Lucid costs. As far as range is concerned, my BEV just suits me perfectly.

It’s unlikely anyone who can afford a Lucid Air would choose an Aptera for a 2,300 mile cross country road trip on highways shared with Semi rigs.