Toyota Motor Corporation is entering a vehicle equipped with a developmental hydrogen-powered engine (earlier post) at the five-hour-long Super Taikyu Series 2021 Powered by Hankook Round 5 Suzuka S-tai, which takes place this weekend. Just as in Round 3 and Round 4, the vehicle will be entered under the ORC ROOKIE Racing banner, and Toyota President Akio Toyoda will participate in the race as the driver Morizo. 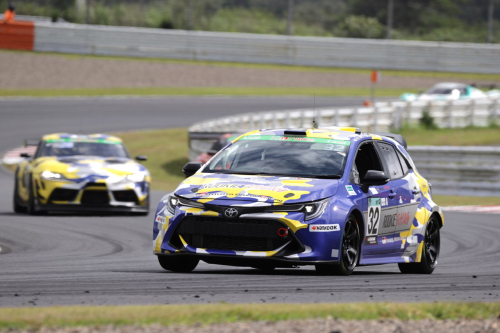 In addition to developing the hydrogen engine further, Toyota is using the race events to focus on broader hydrogen industry and supply chain challenges. In the race at Fuji Speedway, Toyota tried “using" hydrogen; in the race at Autopolis, Toyota tried to expand its options in the area of “producing” hydrogen; in the Suzuka race this time, Toyota is workingon the theme of “transporting” hydrogen.

Specifically, Toyota will use hydrogen produced from Australian lignite to power its vehicle in Round 5; this hydrogen will be transported to and within Japan by a partnership of three companies: Kawasaki Heavy Industries, Iwatani Corporation, and Electric Power Development Co. (J-Power).

In 2016, it has established HySTRA, a technology research association with Iwatani, J-Power, and others, and plans to produce hydrogen economically from Australian lignite, which is abundant and inexpensive to mine, and to transport the hydrogen to Japan.

In FY2022, Toyota will conduct a trial of hydrogen transportation from Australia to Japan using the first liquefied hydrogen carrier, the Suiso Frontier, which was built by combining Kawasaki Heavy Industries’ hydrogen-related technologies and shipbuilding technologies. This trial is not only a transporting challenge, but also a “storing” challenge by turning hydrogen into a liquid. In the mid-2020s, Toyota will also build a large-scale liquefied hydrogen carrier capable of transporting 10,000 tons of hydrogen at a time, and by 2030, the company plans to transport 225,000 tons of hydrogen from Australia as a full-scale commercial supply chain.

Japan is expected to have a need for about 3 million tons of hydrogen in 2030, and about 20 million tons in 2050. As introduction increases, it is necessary to procure hydrogen on a large scale not only from Japan but also from overseas.

Kawasaki Heavy Industries, Iwatani, and J-Power, are trialing the air transportation of hydrogen from Australia to Japan, and will supply some of the hydrogen to Toyota for the Super Taikyu Series 2021 Round 5 Suzuka S-tai. Through the on-site use of this hydrogen at the race, the three companies and Toyota will share concrete future plans for both transporting and using hydrogen.

Specifically, Toyota has improved the power output to a level equivalent to that of a gasoline engine. As for the filling time, the company has made improvements so that the car can be filled from both sides of the vehicle, reducing the filling time from about three minutes in Autopolis to about two minutes this time.

Additionally, Toyota has introduced a new connected system at the development site, which enables the collection of a large amount of more accurate data at a higher speed. In addition to accelerating development with connected technology, Toyota would like to train the connected technology in the harsh environment of motorsports, and apply the lessons learned from this initiative to the making of better cars and development of services in the future.

Typically the arguments against the use of hydrogen and for a mono-technical use of batteries have centered on efficiency.

Cheaper and low or zero carbon production changes the equation however.

No one chooses a car solely on the grounds of lowest energy use, or a house for that matter.

As against a decade ago, the fall in cost of renewables mean that absolute efficiency is less important against other metrics.

Over the next decade, falling electrolyser costs will do the same for green hydrogen.

... plans to produce hydrogen economically from Australian lignite, which is abundant and inexpensive to mine....

How long have I been saying that the most economic ways to produce hydrogen are SMR and coal gasification?  And now Toyota comes in and confirms all the worst stereotypes about hypedrogen.


This spells the death of the planet.  I TOLD YOU SO!

Carbon capture is part of the deal.
So long as it works, that's fine.
If not then electrolysis of solar etc from Australia's massive resources is an option.

Falling electrolyer prices as well as renewables mean that what is too expensive at the moment is likely to be a different proposition by 2030.

The transport supply chain would remain the same, so developing it works in either case.

Making the perfect the enemy of more possible improvement is rarely good policy.

In the HySTRA Project, J-Power will be responsible for producing the Hydrogen using a Oxygen-blown IGCC process. This is similar to the Southern Company Kemper Project which used IGCC and Mississippi Lignite and has been a costly failure. Maybe they will do better.

Here are a couple of links on the Kemper fiasco:

It was so poorly set up, funded and managed that it is difficult to draw conclusions as to the underlying practicality of the use of lignite resources and carbon capture.

Presumably the engineers at HySTRA at least learnt something about what won't work from it.

Since I understand that China is likely to rely on coal gasification, I had a look to see what is happening there:

I am not sure how they make their argument on page 209 that:

' Field tests both in China and abroad indicate that the shal-
low-layer UCG technology is basically mature, but both
technology and economic benefits need to be improved to
realize industrialization development of UCG. In line with
relevant technological progress, industrial situation and envi-
ronmental protection requirements, one development direction
of UCG is deep-layer development, avoiding the environment
sensitive areas and traditional coal mining areas;'

As I can't spot where they reference any projects where it is working, and their list of
projects in table 1 doesn't list anything as working and stops in 2013, although the report is dated 2019.

Kemper does not get a mention.

All very mysterious, and not at all persuasive.

I find my assumptions were in error.
I assumed that the project would try to capture and store the carbon, but there is no mention of that.
Nor is there in the HySTRA project:

Underground Coal Gasification has not been successful in Australia (banned in Queensland).
https://www.abc.net.au/news/2019-05-08/controversial-coal-gas-ucg-tech-holds-hope-for-sa-town/11086634
There is a plan to bury CO2 in the seabed, "There’s a Plan to Bury Asia’s Carbon Emissions Under The Sea".
https://www.bloomberg.com/news/articles/2020-12-06/there-s-a-plan-to-bury-asia-s-carbon-emissions-under-the-ocean

Oxygen-blown gasification of Illinois #6 coal and petcoke was successfully carried out for years at the Wabash River Repowering Project.  Kemper was obviously undertaken without getting as much of that expertise on-board as possible.

That should mean that the first stage of the process Toyota wants to carry out, making lignite into natural gas for conversion to hydrogen, is known tech.

All the other links are unproven though, and then there is the CO2......

I've got the Australian end of the project. It is in the Latrobe Valley, Victoria:

'
Please use the sharing tools found via the share button at the top or side of articles. Copying articles to share with others is a breach of FT.com T&Cs and Copyright Policy. Email licensing@ft.com to buy additional rights. Subscribers may share up to 10 or 20 articles per month using the gift article service. More information can be found at https://www.ft.com/tour.
https://www.ft.com/content/408cfa46-3e06-11e8-b7e0-52972418fec4

In February the Victoria state government began offshore seismic surveys to determine if dried up oil wells in the Gippsland Basin previously used by ExxonMobil would be suitable to store CO2 created by the coal to hydrogen conversion project. But energy analysts caution that there are still very few commercially viable carbon capture and storage facilities worldwide.

Kawasaki Heavy has hedged its bets on whether converting coal to hydrogen is the best way to achieve Japan’s dream of a hydrogen-powered “green energy” future. The company has backed a rival project in Norway, which uses renewable energy to create hydrogen from water — a cleaner but possibly costlier way to produce the fuel.'

I did not look carefully enough before posting an extract from the FT article, and can't edit is out.

Can't figure why Toyota is so taken with H2; They must have investments in the processes.
Anyway, here is a link without comment:
https://www.rechargenews.com/energy-transition/hydrogen-for-heating-and-road-transport-is-not-efficient-and-does-not-make-economic-sense/2-1-1069478

Clearly batteries don't make sense either, as you get less useful energy out than you put in.

But that is entropy and storage for you.

You're comparing apples and watermelons, Davemart.

I would have thought the main usage for H2 is something to do with excess renewables, say at night or when you have a lot of wind and solar at the same time.
This is one thing, as long as the investment in electrolysers is not too large. However, you have a chicken and egg problem here. Electrolyzers will only get cheap if you build a lot of them, and this will only happen very slowly if you are using excess renewables.
If you put in a lot of renewables, you could have the grid "swim" in renewables with a large amount of excess for H2.
However, this will be very expensive and will make the economics of the grid difficult (there will be fewer times when you need a dispatchable source of generation, but you will always need them).
Also, what source of renewables - solar or offshore wind?
Solar has limited run times per day, and offshore wind is expensive.
So, I still don't like H2 as an energy carrier.
Better use batteries for short haul and intermittent pantograph charging for long haul.
Maybe some low CO2 fuel for shipping (Methanol / butanol), and offsetting or low CO2 fuels for aviation.
(Offsetting would have to be actual offsetting, not paper offsetting).

I'm arguing against those who try to claim that apples are the one and only thing we should eat, and watermelons should be banned.

I am not sure how battolysers fit into the system of absolutes some favor.

@ EP:
Davemart speaks of himself as being a H2-nerd; I suspect that he is more a H2-nut.

I am perfectly happy to use batteries where their performance and cost envelopes match the application.

Sorry if that falls short of the standards of the One True Faith.

@Lad Because Toyota is lagging in BEV development.

There's a certain irony in this. I remember when Toyota introduced the Prius, GM was pissing all over it. They claimed their Hydrogen Cars was "just around the corner" and would blow away hybrids.

Unless and until we get a high-performing sodium ion battery, we're best off reserving batteries for the high-value uses like electronics and transport.  Grid electric storage is way down the list.

Stationary energy storage can be handled by methods such as solar-salt heat storage.  The Natrium project is showing how that will work.  Compared to batteries, nitrate salts are extremely long-lived and cheap.  Horses for courses.

This has to be the WTF vehicle of the year.

There should be a redo of the film "Who Killed the Electric Car". How the roles have switched.

Race driver Morizo AKA Toyota Akio Toyoda has gone completely crazy.
Just read: "Toyota CEO: Going All-EV Could Cost Japan Millions Of Jobs", https://insideevs.com/news/534262/all-ev-plans-threaten-japan/
In this article, he states that he "believes the road map should take into account the reality that Japan’s economic lifeblood stems from manufacturing."
Manufacturing is religion in Japan (remember foreign a samurai blade was a sacred art done by Shinto priests).
This is completely stupid! Since manufacturing BEV cars is almost exactly like making ICE cars. So unless you let China, Korea, and Honda build all the BEV then Toyota could lose some exports. Tyoda needs to hire a new Marketing team and stop driving Hydrogen Corollas.

Make the hydrogen where you put it in the vehicle