Audi Q4 e-tron models ready for configuration for US buyers 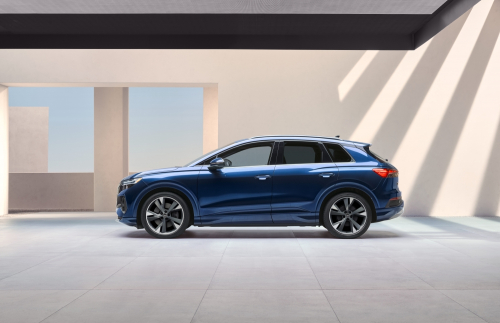 The Q4 50 e-tron and its Sportback variation offer Audi’s signature quattro four-wheel drive, powered by dual asynchronous motors, with an EPA-estimated range of 241 miles. The Q4 40 e-tron arrives equipped with rear-wheel drive, and is powered by a single asynchronous electric motor. The Q4 e-tron model line comes to market supported by an Audi ecosystem designed to make a seamless transition to electric vehicle ownership.

Powering the Q4 40 e-tron is an asynchronous electric motor producing 201 horsepower and 229 lb-ft (310 N·m) of torque. This gives the vehicle a 0-60 mph acceleration in 7.9 seconds. The Q4 50 e-tron and its Sportback variant come equipped with a dual asynchronous electric motors, which raises the horsepower to 295 and 339 lb-ft of torque (460 N·m). These higher-powered models have a 0-60 mph acceleration of 5.8 seconds.

Customers driving the Audi Q4 e-tron will be able to take advantage of a maximum 125 kW charging speed when using public DC fast charging and can charge from 5% to 80% charge in about 38 minutes. With purchase of Q4 e-tron customers receive 250 kWh at Electrify America public charging stations over the first two years of ownership. Customers access this program through the myAudi application.