A new white paper published by the Argonne National Laboratory Collaborative Center for Energy Storage Science (ACCESS) outlines a clear set of battery requirements and research and development needs to accelerate the commercialization of electric propulsion for aviation—from air taxis in the near term to 737 class aircraft in the long term.

It’s clear the next decade will see a worldwide race to commercialize electric flight. The convening of the battery and aviation communities helped establish a shared language to ensure that deep knowledge gained from the electrification of ground transport could accelerate the transition for aircraft.

Electric aviation is poised to take off within the next five to 10 years, with innovations already being pursued for electric vehicle batteries playing a significant role in enabling electric aviation. However, differences exist between the two applications that require dedicated focus on mission specific use of the batteries and the unique requirements that it drives, while leveraging some of the advantages offered by aviation-specific missions. 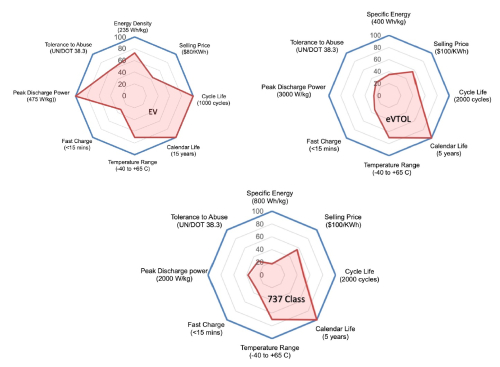 Comparison of the performance of state-of-the-art, Li-ion batteries compared to targets for EVs, eVTOLs, and 737-class aircraft. The targets for aviation are still preliminary, and more analysis is needed to ascertain the targets. Source: “Assessment of the R&D Needs for Electric Aviation”

In the long term, the energy density needs for electric aviation far outstrip the goals of current DOE and industry investments, requiring strategic thinking around the best approaches to enable this future.

The white paper findings provide a framework for the development of an investment strategy by the government agencies for battery technologies specific to electric aviation beyond the current level of investment in the automotive sector.

Significant investment is being made in the next era of aviation by aerospace companies, including Boeing, Airbus, Rolls, GE, United Technologies, Embraer, Bell and others. In addition, numerous startup efforts in the United States focused on innovations around electric aviation. This includes Uber Elevate that aims to provide affordable shared flights by 2023 with electrification as its core principle. Also, automotive companies, including Daimler, Toyota, Hyundai and Porsche, are getting involved in aviation startups. Hyundai is in partnership with Uber on a concept air mobility vehicle with a 60-mile range.

Argonne is committed to driving the electrification of aviation and, during the December meeting, encouraged industry leaders to share ideas that would help them reach shared goals. Argonne has a storied history of battery and energy storage innovations. The Laboratory has helped revolutionize the lithium-ion battery, which became a game changer for the auto industry, noted Suresh Sunderrajan, associate laboratory director for the Energy and Global Security directorate.

In the near-term, lithium-ion batteries could be adapted for short-range aircraft concepts for initial market introduction. Continued electrification and expansion of the electrified aircraft market will occur as battery performance improves and advanced chemistries are adapted for aviation-specific needs. However, electrification of large regional and 737-class aircrafts requires new types of energy storage. So, the next decade will see a global race to commercialize electric flight, according to the white paper.

DOE and NASA plan to organize a future session of this assessment. NASA intends to examine the means to enable R&D to better define the aircraft battery needs and ensure that standards for the industry are developed. DOE plans to include requirements for aircraft in future Federal Opportunity Announcements (FOA) and national lab funding calls.

Then, DOE and NASA will consider organizing a brainstorming session to identify ways for very high-energy density electrochemical energy storage/conversion that could enable electric propulsion for large aircrafts. And the two agencies also intend to organize a brainstorming meeting to standardize battery packs for aircraft and ease the supply chain of cells or packs.

The United States has the critical mass of expertise in batteries, aviation, propulsion, and system integration to invent the power source for the next 100 years of aviation.

—“Assessment of the R&D Needs for Electric Aviation”

Electric aviation is not an end in itself.
Low greenhouse gas aviation (CO2 and water vapor) is the goal, and currently only chemical fuels can do this beyond short hops.
The scales of improvement are so large for longer range and higher capacity that it is unlikely to be achieved at all with batteries.
Note that we have been building batteries for > 100 years, and LiIon batteries for > 20 years - these are not new technologies, they are reasonably mature so we should not expect huge improvements in performance (whatever abut cost).
IMO, some kind of offsetting is the best way, but it has to be actual offsetting, not just some forests that you have had for decades.

For instance: nuclear / coal offsetting.
Close down a coal fired power station and replace it with nuclear (or solar/wind/ storage - whatever). You actually have to close the coal station and continue to generate electricity.
Use the saved carbon to allow the use of avgas.

I think that we will see regular use of battery-electric air taxis and commuter aircraft by the second half of the 2020's. This is based partially on what is already under test. Also if you look at the graphics, they are projecting that they need 800 kWhr/kg for the 737 and then if you look at the article for Lyten, thy are projecting 900 kWhr/kg by 2025 or so. If these batteries work out, then the 737 size aircraft does not look so impossible. If you think that we might get lithium air to work reliably, then not only is the 737 size aircraft possible, it is possible to build 777 capacity with the range to span the pacific. In theory, lithium air has about 90% of the energy density of jet fuel but the efficiency of the electric drives more than makes up for the small deficiency of the energy. It is possible that the batteries would weight less than the fuel. The airplane would need to look somewhat different as one advantage of using liquid fuel is that the weight of the fuel is expended during the flight. Therefore, the landing weight of a battery electric plane is higher.

I am not going to hold my breath on lithium air working but I think that there is enough work going on with lithium sulfur, that we will have practical lithium sulfur batteries before 2025.

To understand whether or not an 800 isWh/kg batter is achievable, it’s more important to look at the theoretical energy density and the amount of money, effort and talent spent to realize the potential than it is to look at a historical timeline.

Nuclear energy, weapons, the space race, all occurred at dramatically accelerated timelines because the funds and talent were focused on solving the materials sciences / physics / chemistry problems that had to be solved to realize them.

Batteries didn’t advance much from 1900-1950 because they were “good enough” for what we used them for. The rate of improvement since 1950 has been remarkable and in the last 10 years has been astonishing.

We developed a need and funding, science and engineering responded.

When you examine the energy potential of lithium and magnesium, and the efficiency of electric motors, (less energy density required than for Avgas or Jet A) these proposed aviation vehicles are certainly realizable.

Currently 737s fly at speeds close to 550 mph; That takes a lot of power so range is but one of the concerns that battery-powered aircraft must meet...I wonder how research is progressing on developing H2 as a combustion and/or FC replacement for jet fuel?

I'd venture to say that a Chinese plasma jet engine is a viable replacement for present jet engines. No fossils involved and no detrimental emissions.
https://www.youtube.com/watch?v=w6riupHnnnU

Hydrogen has terrible volumetric energy density. You can’t burn it in a turbine and achieve a competitive propulsion system.

The reason electric motors are being pursued is they at least have the efficiency to make up for some of the limitations of reduced energy density of the alternatives to hydrocarbons.