Evolito was spun out earlier this year by YASA (the pioneer of automotive axial-flux electric motors acquired by Mercedes-Benz in July 2021) exclusively to commercialize YASA’s next-generation electric motor technology and IP for the rapidly-growing aerospace market.

The business’s axial-flux motor technology has been proven in volume series production in the automotive industry and has even greater advantages in the aerospace market. Evolito’s ultra high-performance, low-weight axial-flux motors and power electronics are smaller, lighter and more robust than any other competing technology, opening up a range of new opportunities for Electric Vertical Take-off and Landing (eVTOL), Fixed Wing and distributed electric propulsion applications such as Urban Air Mobility (UAM). 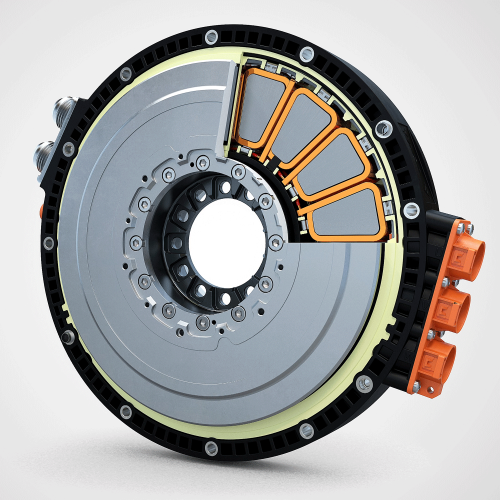 The segmented topology of the Evolito motor is inherently more robust than other electric motor approaches, the company said, making it suited to the demands of the aerospace market where safety is paramount.

Evolito presently offers the YASA P400 & YASA 750 motors, but is expanding its range with new direct-drive and indirect-drive motors.

Electrification in aerospace is some ten years behind that of the automotive industry, but the market potential is huge. Electric Vertical Take-off and Landing, Electric Helicopter, Fixed-Wing and Urban Air Mobility aircraft need high power density, low weight electric powertrains with inherently high safety factors—a combination of attributes that are unique to our axial-flux electric motor and power electronics.

By leveraging YASA’s unique IP in the aerospace market, Evolito will fast-track the commercialization of electric flight and transform mobility as we know it.

indirect-drive
Does this refer to gears?

Just say gears instead of indirect

Hub motors for vehicles also?
So far hub motors have met with little success; but, a lighter more efficient motor might work in the application.

Lighter air cooled would be good YASA are liquid cooled

Liquid cooled is lighter just about for anything. Why do you think that high performance motorcycles are liquid cooled?