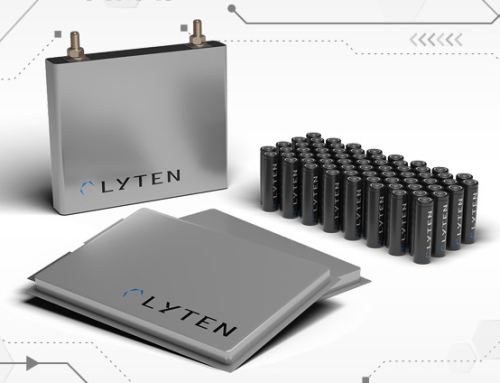 Lyten, which has just emerged from stealth mode, worked with the US Government for several years to test and improve LytCell capabilities in select defense-related applications and is now ready to introduce its battery technology platform to the electric vehicle market.

Lyten says that its 3D Graphene-based Li-S architecture has the potential to reach a gravimetric energy density of 900 Wh/kg, which would significantly outperform both conventional lithium-ion and solid-state batteries if achieved.

Lyten Sulfur Caging is the technology used in LytCell batteries to unlock the performance potential of sulfur by arresting the poly-sulfide shuttle, a cycle-life compromising factor that has up to now prevented practical Li-S use in battery electric vehicles. Under Department of Defense (DoD) test protocols, a LytCell prototype design has demonstrated greater than 1,400 cycles.

Critical to Lyten’s battery breakthrough was the development of Lyten 3D Graphene, a novel three-dimensional graphene material platform that took years to refine. This unique material can be engineered and tuned at the molecular level to specific battery application requirements.

Lyten says that its batteries will be safer in vehicles than conventional Li-ion batteries because Li-S does not contain oxygen from metallic oxides, which is what drives thermal runaway events that have plagued many EVs.

Lyten says that its battery platform will offer other advantages to automakers and their end users:

Lyten expects full production and market availability for MY 2025-2026 vehicles.

Beyond BEVs, LytCell battery technology is an attractive solution for commercial vehicle, electric flight, commercial aerospace, and other applications. Lyten 3D Graphene technology has also been embedded in advanced sensors in addition to thermoplastic composites for vehicle light-weighting and strengthening applications.

Rather less talk about 'potential' and some actual figures on present energy density would be appreciated.

It sounds as though they are still at the cell level, not the pack level Toyota are at, and so have not really had to tackle the issues of how to mass produce the batteries in a dry environment.

The cycle life is great news though, and is the other major issue Toyota have had.

Toyota claim a lot of things, including that EVs are bad. Who has seen this Toyota battery in wide use...or anywhere?

I would also like to see more data on what the current state is on the energy density. Oxis Energy claimed 550 Whr/kg and were supposed to have 600 Whr/kg shortly but they must have had some problems because they are now in bankruptcy.

I am with Paroway on Toyota's battery claims. If Toyota has this great battery technology, why are they lobbying the US congress to slow down the emissions standards? This first thing Toyota needs to do is develop some corporate ethics. Then they can work on battery development.

worked with the US Government for several years