Wärtsilä has a leading role in developing engines for operation on future clean fuels, and has already successfully tested an engine running with a fuel mix containing 70% ammonia. The company anticipates having an engine concept capable of operating with 100% ammonia in 2023.

There is a lot of interest from owners and operators in the potential for new clean-burning fuels, and ammonia is thought to be among the most promising of these candidates. Wärtsilä has already made significant progress in testing ammonia, and we are pleased to work together with them to bring this to reality.

According to SHI, the most likely initial newbuild targets for ships utilizing ammonia fuel will be container vessels and very large crude carriers, operating with 2-stroke main engines and 4-stroke Wärtsilä auxiliary engines. 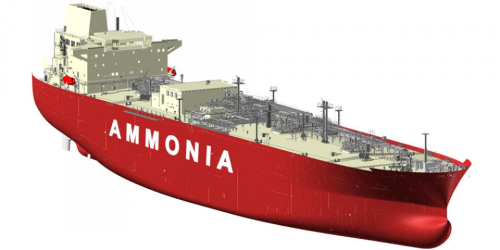 The design was developed to ensure its compatibility with the existing infrastructure for ammonia, while also reflecting the market’s demand for very large gas carriers (VLGCs). The vessel will be 227m long, 36.6m wide, and 23.6m deep—similar dimensions to that of the HHI 91K VLGC design.

It will be equipped with four (4) prismatic-type cargo tanks with a total capacity of 91,000 cubic meters. This design was optimized for the safe and efficient carriage of ammonia as a single cargo, thereby maximising competitiveness for shipowners, both in terms of CAPEX and OPEX.

It will be interesting to see how they control the gases; Ammonium is a real danger to humans; also, they may be creating more (NOX) because of the NH4 radical.
Seems to me H2 would be safer and far less polluting. All they need do is solve the storage problems with H2 and it's useable in FCs.

Every time I think of ammonia as a fuel in common use, I have to reach for the smelling salts.

Ammonia has a higher energy density than liquid H2 and is much easier to store. It is widely used in agriculture as fertilizer and also for smelling salts.
The infrastructure already exists and would be a good candidate for green H2 using SOEC.