Within heavy-duty applications, the power inverter is responsible for controlling the power flow between DC and AC electrical systems in order to run vehicle systems, accessories, and electric machines, such as motors and generators. A high-efficiency inverter is a critical component necessary for environmentally friendly vehicle alternatives.

The key to NREL’s design innovations for SiC thermal management is to improve the heat transfer coefficient, which allows this system to cool itself efficiently and continuously during operation with the engine coolant. This design facilitates an unmatched power density and keeps the system running safely and efficiently.

However, power outputs rely on the maximum temperature limits of the inverter’s power module, which runs the risk of overheating and shutting down. As a result, NREL researchers developed a thermal management system to optimize system efficiency while regulating operating temperatures of the SiC modules directly cooled with 115 °C water-ethylene glycol coolant. The technology developed by the NREL team has been extensively evaluated by the John Deere engineering team led by Dr. Brij Singh.

A common strategy for the thermal management of EV inverters is to run a fluid coolant parallel over the component’s surface to transfer heat and cool the system quickly. The advanced system designed at NREL incorporates perpendicular jet flow with mini-channel- and mini-manifold-based cooling systems to extract heat from the inverter and power module. This design enables an impressive heat-transfer coefficient—as high as 93,000 watts per square meter per degree Kelvin (W/[m2-K])—more than four times higher than current commercial systems. 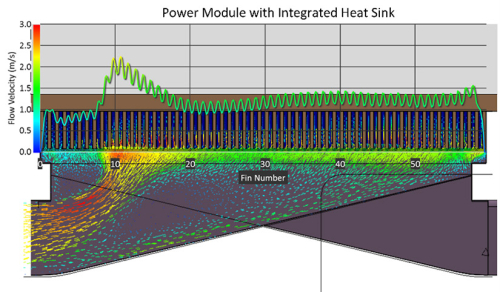 The thermal and mechanical innovations in the SiC design significantly reduced the inverter footprint, creating a smaller and lighter system. The lighter overall weight and improved performance have clear benefits to fuel efficiency and operating costs.

The SiC inverter technology stands out among all competing technologies in terms of energy efficiency, fuel economy, performance, and system integration. With the premium cost of the SiC power converter, the market adoption of this new technology will likely take place where those factors are more important than the initial cost. We believe this inverter will have significant impacts in heavy-duty machinery, aviation, and military applications.

The -40 C to +105 C is probably under the hood ambient with the components being air cooled.

No, that was junction temperature.  We had to calculate thermal resistance and everything.

The numbers sound impressive. The geometry/layout shown as background of the flow field plot shows no enabling innovation? I see simple manifold & fins not jets or impingement?