U-Haul—the largest US retailer of propane—has purchased one million gallons of renewable propane to sell at its company-owned and -operated stores across California for the second year in row. (Earlier post.) U-Haul teamed again with national distributor Suburban Propane Partners, L.P., to continue supplying the fuel at more than 60 propane-dispensing stores in the state. 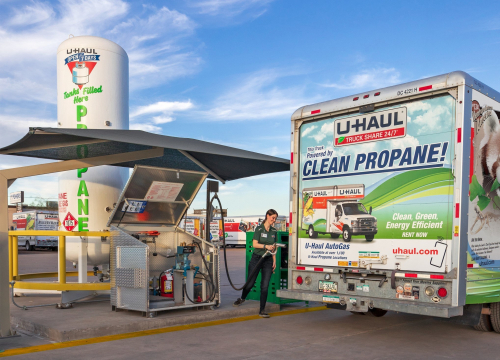 Customers utilized the first million gallons of renewable propane U-Haul bought in 2020, and the second million gallons is already arriving at stores. U-Haul plans for the sustainable product offering to be ongoing due to California’s clean-fuel rebates.

No cost increase is passed on to U-Haul customers as a result of the renewable propane initiative.

Benefits of renewable propane include:

The California Air Resources Board (ARB) has carbon intensity values for renewable propane produced from fats/oils/grease residues (all produced by REG Geismar) ranging from 20.50 gCO2/MJ to 43.50 gCO2/MJ. Propane produced from crude oil refining and natural gas processing carries a CARB-certified CI of 83.19 gCO2/MJ. CARBOB gasoline has a CI of 100.82 gCO2/MJ, and diesel 100.45 gCO2/MJ.

For every one million gallons of renewable propane that U-Haul makes available, it has the global effect of eliminating 5 million tonnes of greenhouse gas emissions from the atmosphere, according to stats the Western Propane Gas Association shared in 2020.

U-Haul began selling propane in 1984 and became the largest US retailer by 1987. Today, U-Haul supplies propane to customers at more than 1,165 stores across the US and Canada.

In September 2020, Suburban Propane took a 39% stake in Oberon Fuels, a San Diego, CA-based development-stage producer of low-carbon, renewable dimethyl ether (rDME) transportation fuel. In June 2021, Oberon began production of the first rDME in the United States, and is the only current commercial producer of this molecule in the world.

Additionally, Oberon, through a public-private partnership with Los Alamos National Laboratory, has secured funding from the US Department of Energy to develop and scale-up steam reforming technology to produce renewable hydrogen from rDME.