ABB is introducing an innovative all-in-one Electric Vehicle (EV) charger, which provides the fastest charging experience on the market. ABB’s new Terra 360 is a modular charger which can simultaneously charge up to four vehicles with dynamic power distribution; drivers will not have to wait if somebody else is already charging ahead of them. They simply pull up to another plug.

The new charger has a maximum output of 360 kW and is capable of fully charging any electric car in 15 minutes or less, meeting the needs of a variety of EV users, whether they need a fast charge or to top their battery up while grocery shopping. 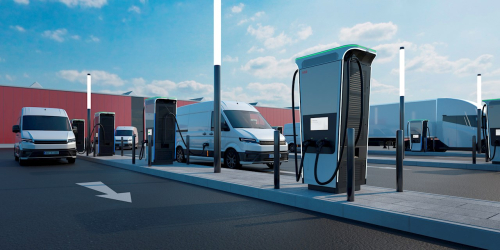 As well as serving the needs of private EV drivers at fueling stations, convenience stores and retail locations, Terra 360 chargers can also be installed on an organization’s commercial premises to charge electric fleet cars, vans and trucks.

Its innovative lighting system guides the user through the charging process and shows the State of Charge (SoC) of the EV battery and the residual time before the end of an optimal charge session. The charger is also wheelchair-accessible and features an ergonomic cable management system that helps drivers plug in quickly with minimal effort.

As well as serving the needs of private EV drivers at fueling stations, convenience stores and retail locations, Terra 360 chargers can also be installed on an organization’s commercial premises to charge electric fleet cars, vans and trucks. This gives owners the flexibility to charge up to four vehicles overnight or to give a quick refill to their EVs in the day. Because Terra 360 chargers have a small footprint, they can be installed in small depots or parking lots where space is at a premium.

Terra 360 chargers are fully customizable. To personalize the appearance, customers can ‘brand’ the chargers by using different foiling or changing the color of the LED light strips. There is also the option to include an integrated 27" advertisement screen to play video and pictures.

ABB is a world leader in electric vehicle infrastructure, offering a full range of charging and electrification solutions for electric cars, electric and hybrid buses, vans, trucks, ships and railways. ABB entered the e-mobility market back in 2010, and today has sold more than 460,000 electric vehicle chargers across more than 88 markets; more than 21,000 DC fast chargers and 440,000 AC chargers, including those sold through Chargedot.

ABB high-power chargers are already being deployed around the world through the company’s partnerships with international charging operators such as IONITY and Electrify America.