Höegh Autoliners entered into a Letter of Intent (LoI) with China Merchants Heavy Industry (Jiangsu) Co., Ltd. (CMHI) to build a series of its multi-fuel and ammonia-ready Aurora class vessels. 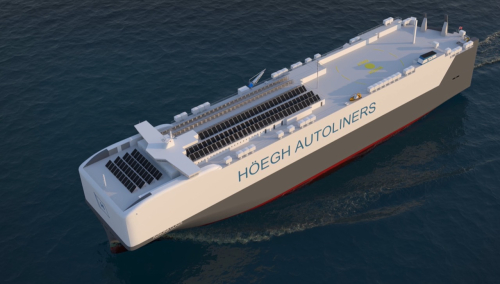 Under the terms of the LoI, the first two vessels will be delivered in the second half of 2024. The Aurora class has DNV’s new “ammonia-ready” notation, which makes it the first in the segment to be ready for operation on carbon-neutral ammonia.

DNV’s “Fuel ready” notation is applicable for ammonia, LNG, LPG and LFL (methanol) as a ship fuel—either individually or for more than one fuel at the same time. It is built around two mandatory options, (D) Design and (Ti/Tc) Tank, with basic and optional levels of preparation that offer a simple framework for all involved parties in newbuildings.

Optional attributes cover the structure, engine and machinery, piping and bunkering, and miscellaneous requirements. With all of the options, owners can choose to prepare for a later installation of any system or go ahead with the actual installation and obtain certification of the system during construction.

Together with its capacity to carry up to 9,100 cars the Aurora ships will be the world’s largest and most environmentally friendly car carriers to be built.

MAN has been working with Höegh to optimize a propulsion system that can run on various biofuels and conventional fuels, including LNG. With what Höegh CEO Andreas Enger called “minor modifications”, the system can transition to use future zero-carbon fuels, including green ammonia.

Since 2008 Höegh Autoliners has achieved a reduced carbon intensity of 37% across its fleet and is significantly ahead of the global IMO 2030-target of 40% reduction. The company’s ambition is to reach a net-zero emissions target by 2040, making it a leader on the path to zero.

We are excited to have secured delivery of the first Aurora class vessel already by 2024. It will be the first Ammonia-ready vessel in its segment and the largest car carrier ever built. The Aurora class will bring cargo efficiency to a new level and put us in the forefront of sustainable shipping.

Höegh Autoliners is a leading global provider of RoRo (Roll On Roll Off) transportation services delivering cars, high and heavy and breakbulk cargoes across the world. The company operates around 40 RoRo vessels in global trade systems and makes about 3,000 port calls each year.

The decarbonisation of shipping seems to be going surprisingly well

You have a lot more weight and space in a ship than in a plane where every kg counts.
Also, you can add solar cells (and rotor sails if you like) to a flat topped ship (but not a container carrier.
I presume the car people are anxious to keep their carbon footprints down and will pay a bit extra to actually do so.
On the other hand: "ammonia ready" is not the same as "running on green ammonia".

Running on anything other than bunker oil is an improvement, even LNG.