Over the last year, the generator population jumped by 22% in the South Coast Air Quality Management District (SCAQMD), and by 34% in the Bay Area Air Quality Management District (BAAQMD) over the last three years. In 2021, the two districts were collectively home to 23,507 backup generators with a capacity of 12.2 gigawatts (GW)—about 15% of California’s entire electricity grid. Of these, 20,907 are diesel-fueled.

The report concludes that diesel generators in the South Coast and Bay Area communities alone have 12.2 GW of generation capacity and produce roughly 20 metric tons (MT) of fine particulate matter, 62 MT of VOCs and almost 1,000 MT of haze-inducing NOx annually.

We have long been concerned about the proliferation of diesel backup generators here in the Bay Area, as highlighted in this report. Emissions from these backup generators can harm local residents, regional air quality and the global climate. This is particularly true in communities already overburdened by air pollution and the Air District is actively pursuing regulations to curb this pollution.

This pollution, in turn, may trigger upwards of $31.8 million in annual health costs in the Bay Area and $103.9 million in South Coast communities, due to increases in mortalities, heart attacks, hospital visits and other adverse consequences—particularly in vulnerable communities.

This research began when I received a notice that a diesel-fueled generator was being sited near my daughter’s high school. I never expected to find so many diesel-fueled generators operating in San Francisco and across the state of California, especially so close to where people live, work, and play. For a state leading in climate action, this growing reliance on diesel underscores a disconnect between how we’re addressing grid reliability, long-term energy affordability, and the ongoing environmental consequences of diesel dependency. 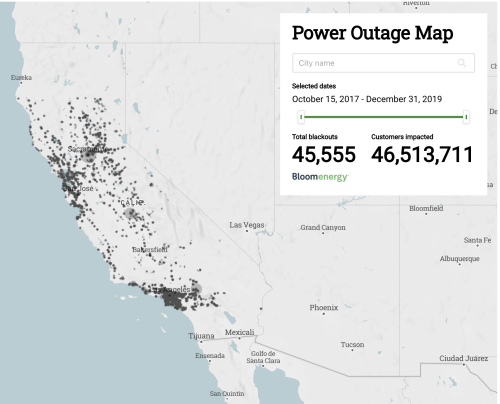 California Power Outage Map. BloomEnergy, working with PowerOutage.us, a company that monitors utilities throughout the country, tracked when and where every blackout occurred in California during a sample period from 15 October 2017 to 31 December 2019, and how many customers it impacted, to generate this interactive map. Source: Bloom Energy

Diesel generators tend to be located close to where people live, work and attend school. M.Cubed’s study highlights that many of these generators are in communities that the California Environmental Protection Agency identifies as “disadvantaged,” according to CalEnviroScreen.

It is concerning to see an increased reliance on diesel-fueled generators, particularly when nearly three-quarters of California voters support alternative, non-harmful energy solutions like fuel cells and more than half desire to see diesel generation reduced. We must embrace existing technologies that will make California’s grid cleaner and more resilient, rather than increasing the population of high-polluting power sources that will set us back in meeting crucial emission reduction goals.

In California, diesel generators are individually permitted by each of the 35 air districts in which they are located, so data on the cumulative population is largely unavailable. Data from individual districts is not aggregated or reported at the state level, and backup generator usage data and permit renewals are self-reported by the operators themselves. As a result, this data remains largely hidden and subject to little regulatory scrutiny.

If they think diesel generators are bad, they should see how nasty a gasoline generator is.

By backup I take it they mean commercial installations of many kw or even mw units? For a unit that is at a constant RPM and consistent load point emissions controls should be easier to monitor and implement.

The solution is a more reliable power grid. I would recommend adding small modular nuclear power closer to the users but that probably will not sit well with the California NIMBYs. Meanwhile over here in Utah (and in Nevada), we are still generating power using coal to supply California with electricity.

@sd:
California has a ways to go before it can claim to be 'zero emissions' without cheating.

Run them on natural gas with batteries

Offer 75% subsidy for generators to LIFEPO energy storage (Like Cash for Clunkers scrapping program) to clean up this and get way more grid resilience, killing two birds with one stone.