EIA projects increases in global energy consumption and emissions through 2050

The US Energy Information Administration (EIA) projects that, absent significant changes in policy or technology, world energy consumption will grow by nearly 50% between 2020 and 2050. In its International Energy Outlook 2021 (IEO2021), EIA projects that strong economic growth, particularly with developing economies in Asia, will drive global increases in energy consumption despite pandemic-related declines and long-term improvements in energy efficiency. 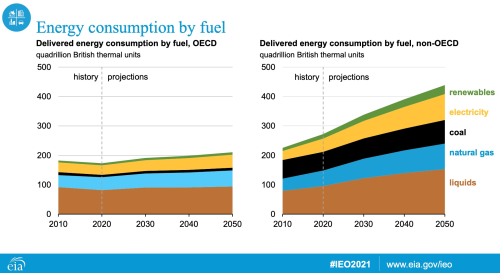 If current policy and technology trends continue, global energy consumption and energy-related carbon dioxide emissions will increase through 2050 as a result of population and economic growth.

According to the IEO2021 Reference case, which projects future energy trends based on current laws and regulations, renewable energy consumption has the strongest growth among energy sources through 2050. Liquid fuels remain the largest source of energy consumption, driven largely by the industrial and transportation sectors. 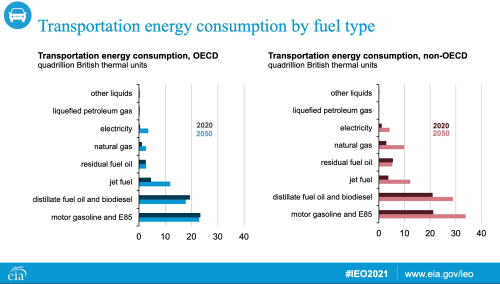 Even with growth in renewable energy, without significant policy changes or technological breakthroughs, we project increasing energy-related carbon dioxide emissions through 2050.

Renewables will be the primary source for new electricity generation, but natural gas, coal, and increasingly batteries will be used to help meet load and support grid reliability.

EIA projects electricity generation to almost double in developing non-OECD countries by 2050. Falling technology costs and favorable laws and regulations mean that much of the new electricity generation will come from renewable energy sources, although natural gas, coal, and batteries will remain critical parts of the electric grid, backing up solar and wind resources.

EIA projects that, driven by increasing populations and fast-growing economies, consumption of liquid fuels will grow the most in non-OECD Asia, where total energy consumption nearly doubles from 2020 to 2050. EIA projects that consumption will outpace production in these countries, driving an increase in imports of crude oil or finished petroleum products, primarily from the Middle East.

The fast-growing economies in Asia could combine to become the largest importer of natural gas and crude oil by 2050, given their significant increase in energy consumption.

IEO2021 contains energy consumption projections for 16 regions of the world. Projections for the United States in IEO2021 are consistent with those released in the Annual Energy Outlook 2021. EIA does not develop the IEO2021 Reference case as the most probable prediction of the future, but rather as a baseline for estimating the effects of policy or technology changes. The four side cases show the effects of changing key model assumptions about economic growth and world oil price.