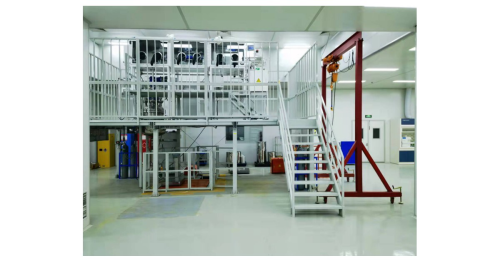 SES has addressed the dendrite safety problem associated with Li-metal batteries by coating lithium metal with a polymer coating and using a high-concentration electrolyte that suppresses the formation of dendrites. SES’ strategy is to dominate in the lithium metal battery market by first commercializing a hybrid method that combines a liquid electrolyte and a solid coating, which is easier to implement than an all-solid solution.

Unlike all-solid-state batteries, SES’s battery technology features high-concentration solvent-in-salt electrolytes with proprietary solvent molecules that have low volatility and are self-extinguishing. SES’s unique electrolyte formulation is stable with Li-Metal and enables hybrid Li-Metal batteries that have high energy density over a wide range of temperature and power requirements, and enhanced cycle life and safety.

This pilot production capability at our Shanghai facility will ensure that SES will be prepared to meet electrolyte supply needs for our hybrid Li-Metal batteries. Our electrolyte pilot production capability is a key enabler for SES’s development of automotive-sized hybrid Li-Metal batteries that will power the next generation of electric vehicles.

Coupled with proprietary AI monitoring software that continually monitors and maintains battery safety, these intelligent batteries are designed to meet the demands of automotive manufacturers looking to introduce energy-dense batteries in long-range EVs.