The enhanced D13 Turbo Compound (D13TC) engine from Volvo Trucks is now standard on all Volvo VNL models, providing enhanced fuel efficiency and reducing overall cost of ownership. In Europe and other key markets, the D13TC engine has exceeded expectations and has proven to be fuel efficient, reliable and popular with drivers. Confidence continues to grow among Volvo Trucks North America customers as orders increase following the next-generation release of the D13TC engine in 2020. 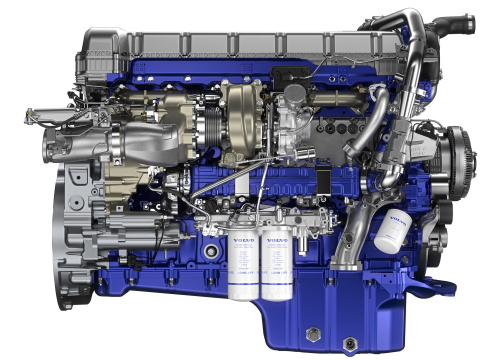 Excess heat and pressure from the exhaust gas are recaptured by the turbo-compound unit. The turbine directs the recaptured energy to a gear link that pushes the crankshaft. The Volvo integrated driveline then uses extreme downspeeding to maintain road speed at lower RPM, saving even more fuel.

The enhanced system includes an updated wave piston design that offers a higher compression ratio of 18.1. The wave piston design guides the flame back to the cylinder center for a more concentrated and efficient burn. Additional ball bearings have been added to the Turbocharger to reduce friction.

The D13 with Turbo Compounding is available from 405-455 hp with up to 1,850 lb-ft of torque. The engine is available in nine different ratings and can be selected in a High Torque, Economy, Adaptive Gearing or Superdirect configuration. These engines work together with the Volvo I-Shift for maximum efficiency and performance by utilizing peak torque down to 900 RPM.

For Volvo Trucks customers, fuel efficiency is crucial to running a successful business. In the Volvo VNL 740, 760 and 860 models, the new D13TC engine offers more fuel savings for a wider range of applications, such as long haul or local delivery, as well as fully or partially loaded.

On average, the D13TC engine delivers improved fuel efficiency of up to 11% compared to 2015 Volvo truck models. Enhanced fuel efficiency options from Volvo Trucks such as the Xceed package, available on the VNL 760 and 860, can include the FlowBelow Aerokit and other optimized exterior design features to deliver fuel efficiency gains as high as 16%.

Since the introduction of the first-generation D13TC engine in North America in 2017, fleet customers such as Tom MacDonald Trucking, VTS Transportation and Tyson Foods have seen improved efficiencies. Based on real-world fuel consumption testing performed by Volvo Trucks, fuel efficiency has increased more than the 3% originally projected. These companies and others, so impressed by the results delivered by the first-generation D13TC engine, have ordered the latest enhanced version, trusting that it will produce even greater fuel efficiency improvements.

VTS, based in suburban Sacramento, California, reports significant fuel savings for its fleet of 11 Volvo D13TC-powered VNL 760s, while Tom MacDonald Trucking cites outstanding improvements to its average miles per gallon and fuel costs. Additionally, Tyson Foods made the D13TC-powered Volvo VNL 740 the preferred tractor in its nationwide fleet.

The new D13TC engine also provides optimized performance efficiency for a wide range of applications, including tanker, bulk haul and flatbed. Dynamic Torque, a feature standard on the D13TC engine, enables the vehicle to adjust to the exact load without impacting performance. Fleet operators benefit from the system’s versatility and the reduced impact of fuel price fluctuations, while drivers appreciate the responsiveness and uphill power.

Growing demand for the Turbo Compound engine technology in North America comes on the heels of global success for Volvo Trucks, including high customer satisfaction in Europe. Among Europe’s long-haul operators, a large number of the orders for the Volvo FH model are with the enhanced Turbo Compound engine.

Citing reduced fuel consumption, improved safety and increased driver comfort, Lithuanian-based Girteka Logistics invested in approximately 2,000 new Volvo FH trucks in a major fleet upgrade earlier this year, a portion of which feature the Turbo Compound engine. In addition, Italy’s Lannutti Group, after a year-long test showing significant fuel usage reductions, signed on for 1,000 new Volvo FH trucks in February of 2021, all of which were spec’d with the Turbo Compound engine.

Turbocompound engines have been in production in HDVs since (about) the early 90’s. Various manufacturers have used the technology from time to time but somehow, nobody has ever been able to utilize its full potential regarding fuel consumption, and after a couple of years, production of most engines has been stopped. Now, it seems as if we have new attempt. We do not have many details in this article but if the Volvo engine can improve FE by 6%, it would be a HUGE improvement over conventional technology.

Turbo-compound piston engines were the last gasp for propeller driven airliners. This is probably close to the last gasp for diesel engines. You could also use the turbine to drive a motor/generator instead of using a geared coupling. At least the new engines are cleaner and more efficient.

Motor/generators have been considered already long time ago but since this option is less efficient than “direct” drive it is not very attractive. Cost is another significant issue. Possibly, integration in a hybrid drive system could give some synergies that outweigh – at least to some extent – the efficiency issue of the motor/generator option but higher cost would still be a remaining issue. On the top of my head, I can recall that a Japanese manufacturer looked at this option, but it was a couple of decades ago and it did not reach production.

The turbocompund systems used on aircraft engines are different animals than the HD engine but could be a topic for another discussion. With modern technology, such aircraft engines could be competitive with turboprop engines.

"Motor/generators have been considered already long time ago..."
and they are currently in use in F1 racing engines, producing > 50% thermal efficiency.

What’s the history on the Volvo compound turbo drive set up? Very interesting claims and impressive efficiency but is it durable and affordable? Where can we get mechanical details?

Van Dyne has what’s called a Superturbo, I wonder how they compare?

As fir the comparison to wwII era aircraft engines I would point out turbo equipment capability, durability and efficiency have developed enormously since then.