Sayona acquiring Moblan project in boost for Québec lithium base

Under an agreement with Lithium Royalty Corp. (LRC), Sayona will acquire LRC’s right to purchase the 60% interest in the Moblan project (Moblan Interest) held by Guo Ao Lithium Ltd (Guo Ao) and will acquire the Moblan Interest from Guo Ao for US$86.5 million. SOQUEM Inc., a wholly owned subsidiary of Investissement Québec and a 40% partner in the project, has waived its right of first refusal in connection with Sayona’s acquisition of the Moblan Interest.

We are delighted to be extending our relationship with Investissement Québec, which has invested billions of dollars in lithium and other resources projects across Québec, including North American Lithium (NAL), Moblan and Nemaska Lithium.

The recent rise in lithium prices reflects the importance of securing quality supply and there is no better place to be than Québec as we develop a lithium resource base to supply North America’s fast‐growing electric vehicle and battery industry.

Located about 130 km north‐west of Chibougamau, Moblan is host to high‐grade spodumene mineralization, with a Mineral Resource Foreign Estimate of 12.03 Mt @ 1.4% Li2O. It is hosted in a well‐studied deposit, with previous exploration work comprising 132 diamond drill holes for more than 17,559m, establishing a 1.5km strike.

The broad thickness of mineralization, typically 20‐30m width, combined with a shallow 30‐35 degree dip results in a favorable mining geometry, with a low waste to ore strip ratio of 2.9 to 1.

Sayona has identified the opportunity for a potential expansion of the resource, including following up previous geotechnical drilling which intersected up to 29.1m of continuous spodumene‐bearing pegmatites outside the resource envelope.

The project is located in a proven lithium mining province, Eeyou‐Istchee James Bay, which hosts proven world‐class lithium resources including Nemaska Lithium’s Whabouchi mine. It is well serviced by key infrastructure and transport and has access to low‐cost, environmentally friendly hydro power.

Moblan is a tier‐one project comparable to any of the region’s top hard-rock lithium mines. It has potential for further expansion and will be an important asset for Sayona’s future growth. We have been monitoring opportunities for further expansion in Québec and this ticks all the right boxes. There is a huge opportunity here for Sayona to develop a new lithium asset base in Northern Québec, adding to our Abitibi lithium hub.

This will further drive our transformation into the leading lithium producer in North America, supplying its accelerating demand for this key battery metal.

Significant opportunity to expand Moblan’s lithium resource base has been identified. Exploration drill planning is underway and will focus on the search for additional high‐grade pegmatite mineralization. This includes step out drilling from the resource area as well as three priority targets in parallel bodies to the south and to the east and west of the resource area.

Sayona continues to expand its Québec lithium assets, having recently announced the potential for a significant resource expansion at its newly acquired North American Lithium (NAL) mine. Recent drilling conducted at the Company’s nearby Authier Lithium Project also has the potential to increase its lithium resource, together with planned drilling at the emerging Tansim Lithium Project. 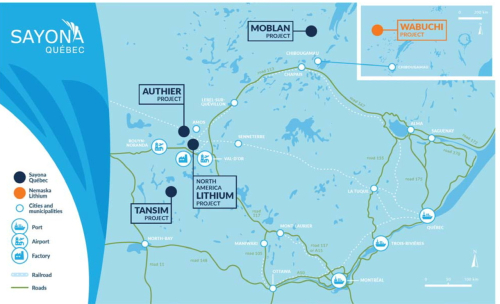 Roskill noted that the consolidation of lithium assets in Québec by Sayona strategically brings together four assets at various stages of development with contained LCE (Lithium Carbonate Equivalent) resources totalling at least 2.57Mt. Sayona ultimately intends to feed a blended ore from the three Abitibi lithium hub assets to a centralized processing facility at La Corne.

Sayona’s moves to strengthen its asset base follow accelerating lithium demand in North America, with lithium prices recently hitting highs amid an upsurge in sales of electric vehicles and following multi‐billion dollar investments by North American automakers and governments.