Researchers at the University of Maryland (UMD) and the US Army Combat Capabilities Development Command (DEVCOM), Army Research Laboratory, have designed a novel electrolyte incorporating a new class of solvents that could lead to rechargeable metal batteries based on magnesium (Mg) or calcium (Ca) while having equal or higher energy density to lithium-based batteries. A paper on their work is published in the journal Science.

Rechargeable magnesium and calcium metal batteries (RMBs and RCBs) are promising alternatives to lithium-ion batteries because of the high crustal abundance and capacity of magnesium and calcium. Yet, they are plagued by sluggish kinetics and parasitic reactions. We found a family of methoxyethyl-amine chelants that greatly promote interfacial charge transfer kinetics and suppress side reactions on both the cathode and metal anode through solvation sheath reorganization, thus enabling stable and highly reversible cycling of the RMB and RCB full cells with energy densities of 412 and 471 watt-hours per kilogram, respectively. This work provides a versatile electrolyte design strategy for divalent metal batteries. 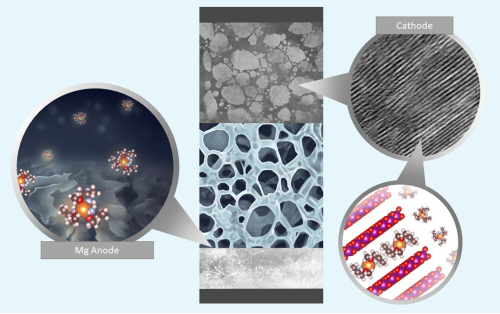 Magnesium is substantially more abundant than lithium, which should meet the needs of the ever-growing battery market. The low redox potential and large capacity of magnesium metal anode could also potentially provide an energy density comparable or even greater than that of lithium-ion batteries when paired with high voltage oxide cathodes.

Despite these advantages, magnesium metal batteries still face many issues that hinder their development. One major problem pertains to magnesium’s strong reaction to conventional electrolytes during battery operation—both electrodes must be compatible with the electrolyte in order for the battery to attain a sufficient energy density.

As an anode material, magnesium has a tendency to corrode the electrolyte and create a thick coating around the anode.

While similar coatings in lithium-ion batteries enable the diffusion of lithium ions and protect the electrolyte from further decomposition, this coating instead blocks the magnesium plating and inhibits the necessary electrochemical reactions from occurring.

In an effort to address this problem, a UMD research team led by Chunsheng Wang, professor of chemical engineering and director of the Center for Research in Extreme Batteries, developed a novel design strategy that incorporated a new class of solvents.

The electrolyte design not only prevented the corrosion process, but it also significantly increased the reaction kinetics of both the anode and the cathode, boosting the battery’s overall performance.

Previous electrolytes could plate magnesium, but they had a lot of drawbacks. This research solved this problem with a new electrolyte that allowed the plating of magnesium metal but also the usage of higher voltage cathodes. It’s the first time a magnesium battery theoretically reached a similar energy density as a lithium-ion battery.

The researchers also found they could apply the same design principle to other materials that fall under the category of divalent metals, not just magnesium.

The test with calcium demonstrates that this electrolyte design could be extended to other types of multivalent batteries that have low potential and broaden the choice of electrode materials in general. People are especially interested in calcium because the potential of a calcium anode is even lower than that of a magnesium anode, and calcium is also very abundant in the earth’s crust.

Army researchers mainly supported the study through density functional theory (DFT) calculations that helped the team understand why the new electrolyte led to these improvements and guide search for new electrolytes.

The Army helped us understand the mechanics of exactly what happened. We have knowledge about the phenomenon, but the calculations they provided played an important role in demonstrating this technology and what we should do next to make it better.

According to Wang, the team plans to optimize the electrolyte and then upscale the concept into a large-scale power cell.

Borodin explained that this new design strategy could signify a real breakthrough for divalent metal batteries after two decades of research fraught with issues related to insufficient energy density caused by electrode-electrolyte incompatibility.

If electric vehicles have to replace IC engine one, non lithium chiep battery has to be a reality.